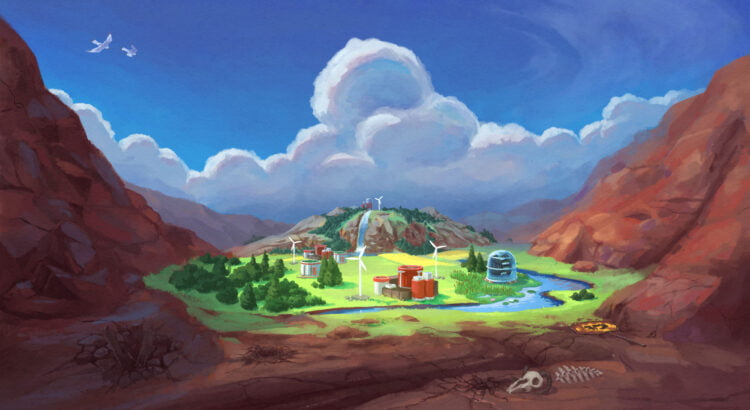 Dubbed as an inverse city builder, Terra Nil is probably one of the most unique games you’re probably going to run into in that genre. The basic gist of it is that you’re trying to restore a variety of biomes back to their original glory, and to do that, you have to use technology that’s naturally powered like solar panels and windmills.

That’s certainly a clever take that’s positively brimming with potential, and as Terra Nil’s demo shows — available now for a limited time through Steam’s Next Fest event — it’s very much possible to make an extremely creative strategic game and not have to rely on combat in any way.

The folks at Free Lives (whose previous releases Gorn and Broforce go for pretty much the opposite) have shown remarkable creativity with Terra Nil. For as brilliant as its core concept is, it wouldn’t have much to go on if the gameplay was boring, and that’s thankfully not the case in this demo.

Maps aren’t very large at all in Terra Nil, and that’s for the better. Your main goal each time is to be strategic with your structure placement throughout the limited space you’re given in order to maximize their effectiveness in restoring the exhausted biomes you set down upon each time, cleaning the water, restoring the lushness to the land and making life come back to them in the process.

But bringing back life to these places isn’t the end of the game. After you’re successful in resurrecting a location you have to leave it intact, meaning that before packing up and boarding your airship and taking off you’re required to recycle all of your structures and undo any sort of pollution you might’ve produced along the way of accomplishing your task.

It’s exciting to think that such a unique take like Terra Nil’s can fit so well within a genre such as city building or even tactical games. We’re so used to seeing examples of chaos management and utter violence that getting a game such as Terra Nil is extremely refreshing.

Hopefully the final version will be able to carry on with the concept that was so well established in the demo. Sadly, Terra Nil does not have a proper release date yet.