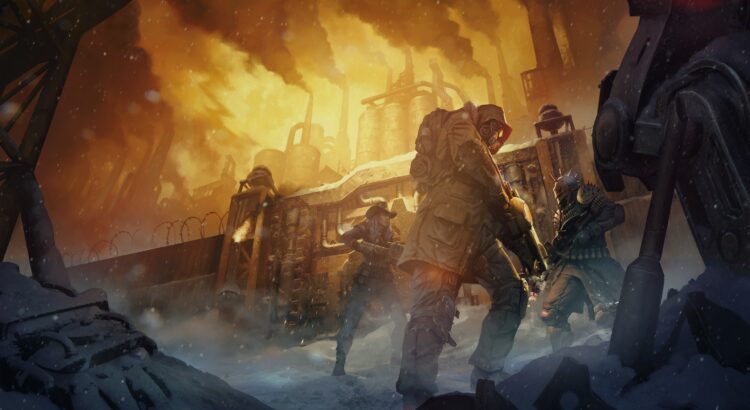 Who knew big corporations would somehow be around after the nuclear apocalypse? Well, fictional works sure did, because if you haven’t heard, capitalism is still a thing even when all hell has broken loose and we’re struggling to keep things afloat, even in a dust bowl such as Wasteland 3’s. In that game’s case, it’s all frozen and stuff, but you get the idea…

The Battle for Steeltown is the first paid DLC to come out for Wasteland 3, bringing us to the aptly named Steeltown, where all the weapons, robots and vehicles that our friend the Patriarch is so keen on using. Sadly for our new acquaintances, Libby, the strongest out of the Patriarch’s kids, is rumored to be planning an assault on the factory, not to mention the internal struggles going on inside the stronghold, so it’s up to the Rangers to go and help them somehow in order to keep production going and keep up with demand.

The entirety of the DLC takes place on a new blip on the Colorado map, which you can drive up to and play anytime after reaching level 9 and before entering the point of no return in the main game’s campaign. Steeltown is relatively condensed and contains its own set of smaller spots you get to visit, which include the factory, a junkyard and a third location where the end of the DLC takes place.

If you’ve stopped playing Wasteland 3 anytime close to its original launch, you probably missed some updates that were released since then and before this DLC. To me, the new crafting system was also part of coming back to the game after being away for a while, and to all accounts, it works really well.

The Battle for Steeltown introduces some new recipes that you can make use of materials exclusive to it in order to get some really nifty weapons. Unfortunately, the primary component to these, a special alloy, is only available in limited numbers, so you have to keep that in mind when making decisions on what to make since you can only use so much.

In terms of new gameplay mechanics, the DLC brings some nice little twists to combat. First and foremost, due to your involvement in the conflict between the factory workers and the administration, you get to choose whether or not you use lethal force during combat. The new weapon type stacks concussive damage and can take out targets non-lethally if the total comes to 10. It’s a cool way of approaching the game, but if you want to forgo it completely, you can still go in guns blazing, just don’t expect to be welcomed with open arms by either side after you’re done.

Aside from that particular nugget, there’s now elemental damage and shielding. Enemies can buff each other up forcing you to think about your team’s loadout in order to counter whatever element they might happen to put defenses up for, even when fighting non-lethally. The same goes for your squad of rangers, however, and special armor can now be bought once you get to a certain point in the story that gives you an extra layer of protection.

The best part about Wasteland 3 is by far its story, thanks to some incredibly well-written characters and scenarios. The Battle for Steeltown is also good about putting you in tough situations that give you a number of ways of dealing with them. There’s never a strictly right or wrong approach, and in this DLC especially, I felt really shitty about the decisions I had to go through and live with once I was through its 2 to 3-hour run.

The Battle for Steeltown goes for the same mix of seriousness and borderline ridiculousness as the main content, this time dealing with the toils of capitalism in the apocalypse and how it’s just as bad as it was when the world wasn’t a pile of rubble, maybe even worse, actually. So if you’ve enjoyed what Wasteland 3 was going for originally, you’ll certainly dig what this DLC serves up.