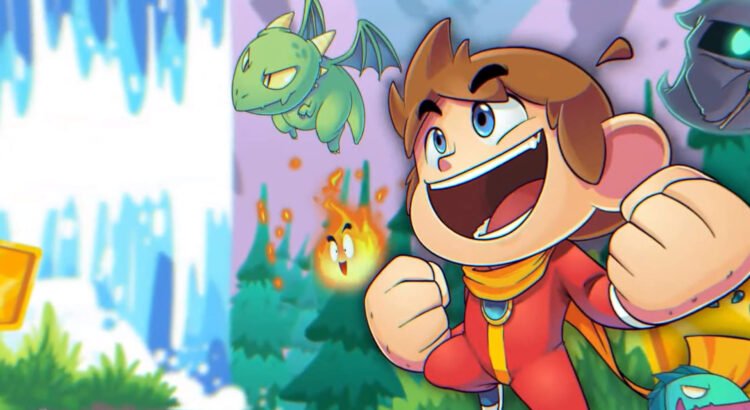 Back in the late 1980s and early 1990s, if you liked videogames, you were either a Sega kid or a Nintendo kid. One side had Super Mario while the other didn’t quite have Sonic yet, but a little kid with a huge fist called Alex Kidd. As anyone who grew up during that period will tell you, you either had one or the other to play, or neither, so once the choice was made, that was it!

In my case, I was a Nintendo kid, more precisely, one with an NES and a handful of pirated carts, which were plentiful and relatively cheap to come by back in the day, meaning that I was only able to really see what the other side of the fence was playing when I happened to visit a school friend or if there was some kind of department store demo unit that happened to be running a Master System.

Long story short(er), I didn’t have a whole lot of experience playing any of the Alex Kidd games growing up. By the time my older brother got a Sega system of his own, it was a Mega Drive, and there was a new mascot in town for the company, a blue hedgehog that liked to run really fast and be a wiseass in cartoons. And that was my entire view of Sega until I had a Dreamcast for myself, decades after Alex Kidd was pushed to the wayside to become nothing but a cameo any time they wanted to throw in a dash of nostalgia in their promotional material.

So it was only with the new Alex Kidd in Miracle World DX, a remake of the very first Alex Kidd game that I truly got a taste of what I missed all those years ago. And let me tell you, I discovered two things right away when I played it. First, I’m absolutely abysmal at playing Alex Kidd. And three, I love it. THIS is how a remake should be done.

From the get go, it’s clear that a lot of love has gone into this. Developer Jankenteam is made up of passionate fans that have spent hours, probably years, playing Alex Kidd in Miracle World and know all its ins and outs, which shows in just how faithful the remake is to the original version and how well it’s transitioned to its gorgeous makeover. So much so you can switch back and forth between styles instantly while playing, with a press of a button, without missing a beat.

Alex Kidd in Miracle World DX is one of the most colorful and cheerful reimaginings this side of Mega Man: Powered Up and you’d be remiss to ignore it due to its simplicity in gameplay. Yeah, levels are incredibly short, you die in one hit and Alex’s physics do take some getting used to, but like any good old school game, practice and muscle memory pay off. And if you think it’s still too hard after a few game over screens, you can always turn infinite lives on.

There’s a little more to this than simply remaking an old hit, though. Alex Kidd in Miracle World DX plays with any veteran of the original’s memory by adding a few new modes to play once you clear it for the first time. Retro Mode is a strictly for the more hardcore of players who wish to relive the experience of playing the original Alex Kidd in Miracle World by having to finish it in a single sitting, while Boss Rush pits you against all the rock-paper-scissors matches you can stomach (and beyond) in an infinite gauntlet.

You heard that right, folks. Alex Kidd likes to settle his matters with friendly bouts of good ol’ jankenpon whenever a “boss” pops up, with a two out of three battle of wits against evil Janken, the Great’s generals, who are taking over the land of Radaxian, which Alex happens to be the prince of! It’s a cute way of doing things, that’s for sure, but don’t get too comfortable since not all foes are satisfied by merely playing with a little kid and are likely to want to do real battle every now and then.

Speaking of hearing, the soundtrack to this remake deserves a mention thanks to how catchy it is. Old tunes were remixed with very Latin strings and rhythms, a blast to listen to, even repeatedly following many retries. It makes sense that it has such a style considering Alex Kidd’s popularity in South America and Europe, with the development team being from Spain, with members José Sanz (aka “Josyanf1“) and Hector Toro (who goes by “Narehop” online), both very talented indie game development veterans.

It’s truly exciting to think that there are devs out there like Jankenteam who are so evidently in love with a game that they’re able to remake it as well as they did with Alex Kidd in Miracle World DX. Fans of the original are sure to get a kick out of this beautiful re-release, and those like me who might’ve missed it the first time around or are too young to have been around when it was new are sure to get a kick — or better put, a punch — out of it as well, thanks to its lovingly put together presentation and great, albeit simple gameplay.