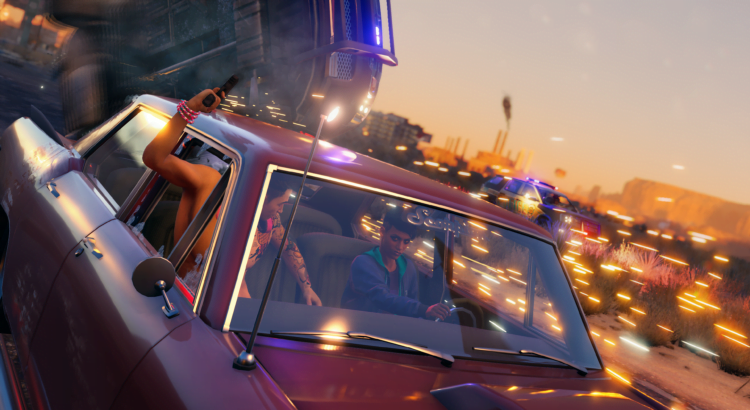 I can’t imagine anyone less interested than me in Saints Row as it is now. As you can attest from my last two reviews on previous entries in the franchise, I’d honestly be grasping at straws if I had to think of anything that the folks at Volition could do that would get me excited for a new entry. To me, it would be best to reinvent it — and apparently they agree with me, since it was just announced that Saints Row is getting completely rebooted come next February!

In an as closed doors as could be presentation considering the current COVID-19 reality we’ve been living in for the last two years, Koch Media and Volition showed a small group of media footage of what’s to be the newest entry in Saints Row, a completely revamped open-world action adventure game set in the desert outskirts of Santo Ileso, a mish-mash of the American Southwest. In it, you, as the newest gangbanger in town, will join forces with recently outed members of the local gangs and found your own group, the titular Saints Row.

According to the developers and producers on hand at the event, the new Saints Row is set to shake up what we expect from the series in some cool ways, while not straying from what makes Saints Row, well, Saints Row. From the little that was shown in the half hour I spent with them, it was clear that their unique brand of humor is still there, but there’s a little more oomph given to the storytelling, or at least more of an emphasis on showing the journey than merely serving an excuse to put you on a murderous rampage as the old games used to do.

They’re really touting this game as the biggest playground of destruction they’ve ever built, and there were certainly a ton of explosions during the demo to attest to that. As the series is wont to do, you’re able to put to use a lot of different weapons, but at least as of now, no fantastical stuff like shark guns. Still, there’s plenty of time between now and the game’s release on February 25th something even nastier than that to pop up, so if you’re a fan of the wackiness, don’t give up yet.

Considering that even Grand Theft Auto got its own reboot of sorts with the latest entries in the way of a deeper development of the core gameplay and an obvious leap in technology, I expect that this new Saints Row will follow a similar path. That, or at least push the series into becoming something more than just pure nonsense. Or maybe I’m putting too many expectations into it, after all it was a very short presentation. Either way, whether we want it or not, Saints Row will be back in a few months and we’ll be on hand to deliver our updated hands-on impressions of the final version by then, hopefully!