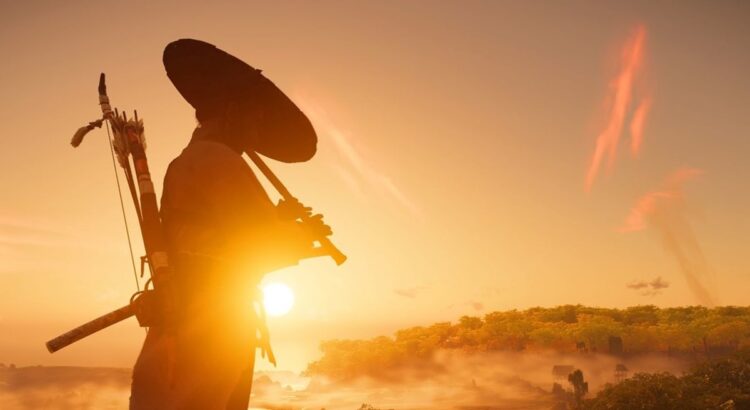 The motive of revenge is usually the fuel for most stories involving samurai, but redemption is rarely the cause of having characters go through a journey within that particular genre. Outside of maybe Miyamoto Musashi, who went from being a nobody riff-raff to becoming a legend in Japanese culture, it’s hard to think of any media related to that cast that deals with overcoming grief or a sense of blame.

There’s also the matter of the actual myth of the samurai, of how they were the epitome of decency and honor in feudal society in Japan. It was Hiroshi Hirata’s work in the Satsuma Gishiden trilogy that opened up a different avenue of thinking in that regard for me, showing that even samurai could be awful, and not only could, but really were so, historically.

Ghost of Tsushima‘s main campaign toys with the idea of samurai not being exactly on the up and up, with protagonist Jin Sakai slowly drifting away from the strict morals of the bushidou in order to try to save his land from the Mongol invasion. And in the new Island of Iki DLC, he has to deal with his internal conflict relating to the loss of his father at the hands of raiders.

In the game’s timeline, fifteen years ago the Sakai led a pacification effort in Iki in order to rid it of the presence of raiders, only to fail miserably resulting in the death of the head of the clan, Jin’s estranged father. During the course of this DLC, he’s forced to face his inner demons as he’s drugged by the Eagle, a witch doctor and leader of the Mongol tribe invading the island. He sees visions of his turmoil with shame and grief, as well as the conflict of having to team up with the very people who killed his mentor in the first place, and facing the fact that there are two sides to every conflict.

Content-wise, if you’ve made your way through Tsushima proper, you’ll know what to expect from Iki Island, that is, a lot of side activities interspersed with the main campaign, which lasts around eight hours if you take your time to enjoy the sights and sounds of the relatively small new landmass. I found the story itself to be enjoyable and not too forced, but it was the entire experience of exploring Iki that made an impact in my overall time playing. It was also extra fun to get some new enemy types like the shaman, who boosts his fellow Mongol warriors’ aggressiveness with their distinct and frightening chanting.

And if you like picking up new gear, there are some neat inclusions in Iki Island. The Sarugami armor set is an amazing addition to Ghost of Tsushima, playing up and giving a lethal edge to the already incredibly powerful parry and riposte system in combat. With it, you can basically combo up kills as long as you can time your hits. Then there’s horse armor, which gives you some extra resilience when riding into battle. Paired with the new charge ability, it’s a game-changer when it comes to fighting larger groups of Mongols.

The Iki island DLC is part of the new Director’s Cut for Ghost of Tsushima, and if you play it on PlayStation 5, you’ll also see a host of technical improvements, like higher resolution and framerate, along with the much demanded lip synch for the Japanese language track during cutscenes.

Sadly, PlayStation 4 owners like myself don’t get any of that, but it doesn’t mean that they should pass on this added content. Even on Sony’s older console, Iki Island looks absolutely gorgeous, as does the rest of the game as a whole. Anyone starting Ghost of Tsushima now should totally play this DLC as soon as possible in their campaign, which is as act 2 opens up in the main game. I’m now anxious to jump back and see how the new gear from Iki will help me deal with the original content which at first play kicked my samurai butt seriously.