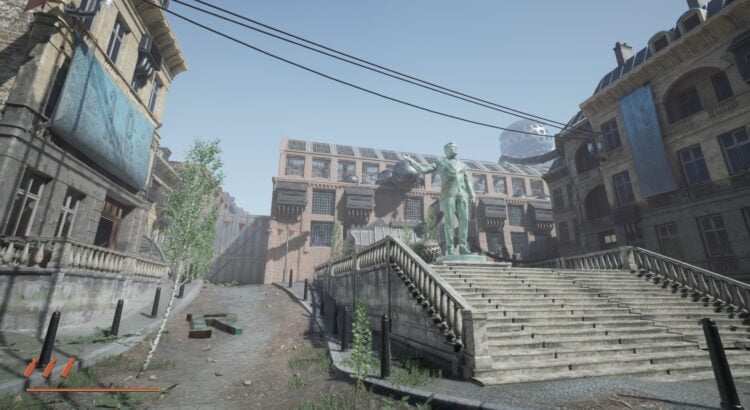 Half-Life 2 somehow came out 17 years ago, and despite the length of time that has passed since its release, it casts a long shadow over all of game development. Its merging of an interesting and involving first-person story combined with innovative gameplay and satisfying shooting is still among the best in its field. Industria takes a lot of inspiration from Half-Life 2 in its primary location and gameplay, but innovates on its formula in several ways. It’s a short experience, but an enjoyable and varied playthrough.

Industria is set in 1989. The Berlin Wall is coming down and you play as Nora, an East German scientist working at the mysterious Atlas Program. As news spreads of the events in Berlin, Nora goes to her office to track down her boyfriend Walter, who has activated a mysterious machine at the heart of the complex. The machine transports Nora to a parallel universe and into the abandoned German-speaking city of Hakavik, ruled over by the benevolent King Rosendal. The city was evacuated a decade ago when The Atlas invaded; a collective of robots who have seemingly conquered much of the world. You must fight your way across the city, dealing with the robotic foes in your way, all while trying to find Walter. The setting and voice performances of Industria are excellent, with special credit going to Nora’s and Brent (seemingly the sole living citizen of Hakavik remaining), who put in appropriately emotional performances. However, the end is very underwhelming and doesn’t address any of the questions raised, instead seemingly teasing a much larger sequel. While the journey is entertaining, the destination feels disappointing, with no explanations regarding the source of the Atlas or how the parallel universes overlap.

Nonetheless, the gameplay of Industria is solid. The shooting is weighty and responsive, even if some weapons (notably the starting pistol) feel underpowered. You start with a melee pickaxe before gradually acquiring a selection of five different weapons, including a pistol, submachine gun, and rifle. Despite the short runtime there is plenty of enemy variety, from the standard lurching bulky robots to the melee-focused white-painted shock troopers who scream when they see you, to robotic dogs reminiscent of a similar enemy in No Man’s Sky. As ammo is normally fairly scarce the game never tends to throw more than three or four enemies at you at once, but as they can sometimes take quite a number of shots to take down, that makes sense. It’s also worth remembering that crates which have a red “supplies” label on them can be smashed open to find extra goodies. The shotgun was definitely my favourite weapon and was very satisfying, especially blowing the robots away at close range. There are also a couple of Half-Life inspired puzzles, none of which are too onerous and help to break up combat. You’re also equipped with a flashlight with a slowly draining battery, which can be recharged by picking up new batteries in the same manner as Alan Wake.

The runtime is a relatively brief three to four hours, but there is plenty of variety throughout. The city of Hakavik looks gorgeous with plenty of dramatic eastern European architecture, the abandoned and overgrown streets looking suitably dramatic, especially with the alien robotic structures seemingly growing on many buildings in a similar manner to how the Combine cannabalized existing buildings with their authoritarian steel structures. Unfortunately the game performance is quite disappointing. While the developers have already issued one patch and more are on the way, the game struggles to maintain a stable framerate even on a beefy system with all ray-tracing effects disabled. Likewise the fourth level suffers from some quite serious texture-seaming issues, meaning you can regularly see the gaps between various textures in the environment whenever you whirl the camera around too quickly. Hopefully these kinks will be worked out in due course.

Industria doesn’t outstay its welcome, but it could have done with more narrative meat on its bones, especially for the ending. It sets up a fascinating world I was interested to learn about, and left me eager for more. The shooting is nicely satisfying and the robot design is appropriately unnerving, meaning the dark hallways of the buildings of Hakavik always felt atmospheric and spooky. It needs some more patches to make the performance adequate, but I will be very interested to see what Bleakmill does next. I hope we’ll return to the world of Industria in the future.