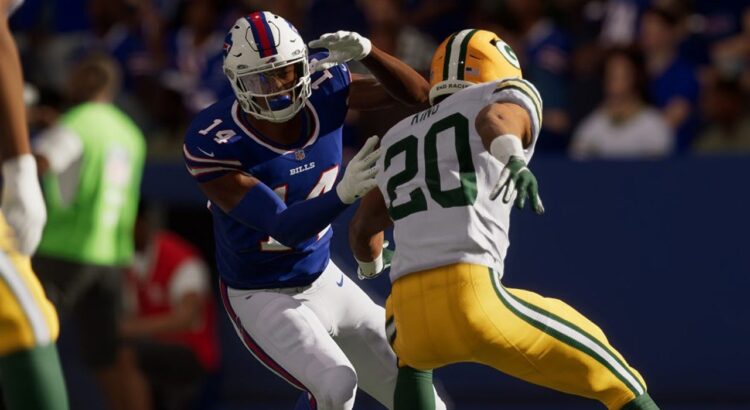 It’s weird to associate the concept of safety to anything relating to American football. Outside of something like rugby and the numerous martial arts, it’s probably the furthest you could be from keeping your body intact while playing. When it comes to videogames based on it, though, they’ve been exactly that for decades now, ever since Electronic Arts’ exclusivity deal with the NFL in order to be the only game in town when it comes to the sport, with the Madden series.

Madden NFL 22 is the latest of those that I’ve gotten to play after taking a leave of absence from last year’s entry. And it doesn’t feel like practically anything has changed since I reviewed Madden NFL 20 and talked about my family’s relationship with football, us being from somewhere where the other kind of football, futebol, is way more popular. That makes it extremely difficult to be extensive in talking about the game, because I would be treading the same field over and over. But then again, isn’t football exactly about that?

The point is that the Madden series has had a long run. It’s probably one of if not the longest uninterrupted videogame franchises today, and there’s a reason for that: it sells crazy well. Electronic Arts knows what it has and who to sell it to. People who play Madden are almost religious about it and are dedicated to a point where they plunk down the cash to buy a new disc or download every year. Some have even been doing it for years, and for others, which might intersect with the former, it’s the only videogame that they play.

So is it really a bad thing that these games play much the same way year in year out? Well, if you’re expecting to be familiar with how they play and really want not to waste any time getting into them, sure. In Madden NFL 22‘s particular case, it carries the very same muscle memory in terms of controls and overall gameplay that’s been a mainstay of the series for more than a decade. For all the bells and whistles that new systems might bring to the field, the core experience of playing remains unchanged in this entry, and will probably remain so for next year’s.

And even in that regard, the visual presentation one, Madden NFL 22 is a little long on the tooth due to the need for it to be a crossgen title. That means that if you’re like me and are playing this on, say, a PlayStation 4, you’ll get a noticeable downgrade if you put your game against the newer gen’s or even, say, Madden NFL 20. Sports games are usually a benchmark when it comes to really showing off the advancements in graphics technology, which overall hurts Madden NFL22 in particular considering the unique world situation we’ve had with COVID-19. If things were different, maybe Madden NFL 22‘s production would’ve made it possible for the previous gen version to be a little more impressive or at least on par with what came before it, but this isn’t the case here.

When it comes to content, you’re dealt the usual that the last many Madden have featured, like season, franchise, your custom character’s story, and online. EA’s notorious for their inclusion of microtransactions in their sports games, and Madden NFL 22 is no different with its franchise mode, offering you players ahoy for your virtual and actual cash. In story mode, much like the last couple of games, you go through the journey of becoming a top player, which can be especially funny if you model your character like a scrawny clown like I do. Perhaps the most compelling way of playing, however, is surprisingly either single play or online, where you can take any team in the league and benefit from its unique boost against foes and friends alike. It’s nothing new to Madden per se, but it’s still a fun little perk, even when playing with cannon fodder teams like the Dolphins. There, I said it, the Dolphins are awful. I love them, but they are REALLY bad in this game AND in real life.

So to go back to my initial point, Madden NFL 22 is a ridiculously safe bet for EA. We’re hopefully on the cusp of getting fully dedicated next gen games that leave behind PlayStation 4 and Xbox One in favor of having a truly superior product, at least in the sports genre. Even though companies like Sony are betting on releasing cross-gen AAA’s like Horizon: Forbidden West, it’s truly to fans’ best interest getting an evolutionary step when in comes to EA’s sports catalog, which as it stands in a unique position of being literally the only game in town and in result, is stagnant and tired. Will Madden NFL 23 get over this hump? We’ll find out in twelve months from now.