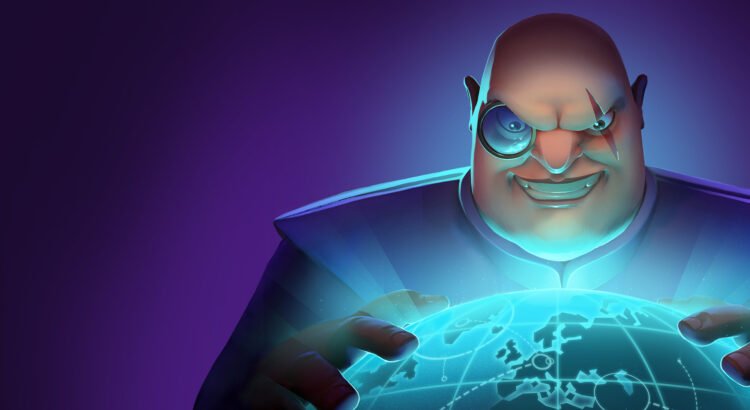 M’colleague Eduardo reviewed the original, PC version of Evil Genius 2: World Domination back in March. He found it to be an enjoyable and entertaining management sim, which was sometimes a bit slow but had plenty to keep you engaged. At the end of November, the game finally arrived on consoles and I’ve recently been taking a look at the PS4 version. Management and RTS games have always had a troubled history on consoles owing to the quite restrictive controller limitations. Most games in this style require quite complicated interfaces with a wide variety of buttons, meaning mapping all of them onto a controller is an uphill struggle. I’m pleased to report that Evil Genius 2 has been ported successfully and despite the controls taking a little while to get used to, you are able to successfully manage your evil empire as successfully as ever.

Evil Genius 2 is a management game most reminiscent of older titles such as Dungeon Keeper, and newer games like Two Point Hospital. The first game was originally released in 2004 by the now defunct Elixir Studios, and the intellectual property was acquired by Rebellion (best known for the Sniper Elite series) in 2004. Playing as one of four James Bond-esque evil geniuses, you start your hidden lair with a casino as a cover operation, hire minions, construct buildings, create evil plots and so on. The gameplay is very standard for the style of game, allowing you to build rooms in your base, hire various staff to run your base and then attend to their needs. Standard minions are free to hire (and are presumably simply drawn to your sheer evilness), but have various needs such as food, somewhere to sleep, etc. You also need to keep your base secure with adequate security guards and features, as enemy agents will attempt to infiltrate and thwart your nefarious plans.

On console, the controls have been adjusted and redesigned to allow you to access a lot of the same functions fairly smoothly. There are dedicated buttons to bring up the sub-menu and then navigate through it using the left-thumbstick, as well as a few shortcuts for commonly used areas such as the build menu. Constructing rooms is straightforward and you can drag the size of room you desire. One thing I did find a bit irritating is that you don’t know how large a room should be at a minimum, as some bits of machinery or room equipment are enormous and you’ll only find this out when you come to place the furniture. That said, going back and amending the size of the room is also very smooth, as none of your build options are committed until you close the menu. An option at the beginning allows you to pause time while you do this, which is very handy for meaning you aren’t missing other important events.

Rooms are hollowed out from the inside of your tropical island evil lair, meaning you will eventually run out of space. However, this is mitigated by the function of your lair having multiple floors, unlocked via research. This means that I never really felt constrained by not having enough space to build, and you can craft your lair to your heart’s content. Each supervillain has a special ability which they can deploy in order to buff nearby minions, and each also has unique missions which sometimes appear, allowing you to gather new henchpeople or create a new evil scheme. Captured enemy spies can also be interrogated for their information; indeed you can if you wish interrogate and murder your own minions, just to remind them of your supreme glory.

The game runs very smoothly and looks stylish on PS4, with no stutters as far as I can tell. The camera is fine to control and because nothing really moves particularly quickly, I never worried about missing a key mission objective because I was doing something else. The art style is very reminiscent of Two Point Hospital or Disney’s The Incredibles, with a kind of comic book-esque cartoony vibe. The humour is generally pretty standard and there wasn’t anything which generated proper laughs, just a few (evil) chuckles here and there. The music is great though, a bombastic assortment of James Bond inspired themes which invoke the atmosphere excellently.

Evil Genius 2: World Domination is certainly another management game, in that it doesn’t do anything which its predecessors haven’t already done before, playing it pretty safe. But as it manages to pull everything it attempts off without a hitch and also provides the pretty unique aesthetic of pretending to be a criminal mastermind, I’m happy to give credit where it is due. For lovers of management sims it’s an easy recommendation, and if you’re limited to only having access to consoles, it’s a good choice for experiencing this style of game in an approachable and streamlined way.