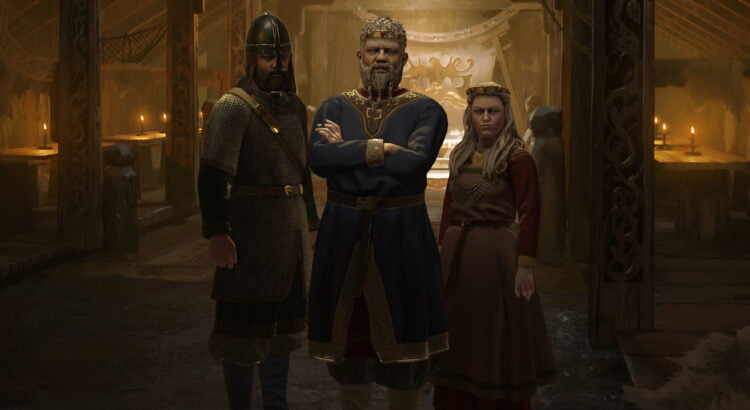 In the very unlikely case you’ve never heard of the Crusader Kings franchise before, a brief refresher: it’s a series created by Paradox Interactive that hinges on building and managing a dynasty over many, many years, as you conquer new territories and form alliances with other realms, solidifying your hold through an increasingly intricate relationship system, not to mention a host of options when it comes to how you carry out your rule. 2020’s Crusader Kings III’s the latest release in the franchise and it further evolved the core formula in some amazing ways, as Gareth attested in his review of the game back then.

This year we saw the release of the first of what’s expected to be many expansions for Crusader Kings III if the previous games are any indication, with the Royal Court DLC. While not revolutionary in any particular way, this new piece of content included a new court setting where you could build and develop an actual virtual court where you as the reigning ruler would carry out your realm’s business. According to our review, that and the new culture system helped make Crusader Kings III‘s already complex gameplay systems even more feature-rich and involving, even though they didn’t really change the basic formula of the game itself.

For the first time ever for the series, Crusader Kings III is now making its way to consoles. Much like another game in a seemingly tough genre to port to consoles, Iron Harvest was surprisingly playable when it got a Complete Edition last year, Crusader Kings III also weathered the transition to gamepad surprisingly well. It’s definitely not the ideal way to play, but it works!

Tactics-heavy titles like this are notoriously keyboard shortcut-heavy affairs, so it’s tough to imagine how much of a challenge it was for the developers to make the leap to console controls. Granted, there’s a lot to get acquainted with when first starting playing Crusader Kings III in this manner, especially if you’ve had no experience with it on PC. The core group of major functions are mapped to each of the triggers, bumpers and analog sticks, which you press to open up various sub-panels that hold a variety of commands.

It’s not instantly intuitive, and admittedly it’ll take anyone a little while to get used to and remember which tool is where when you actually need it, but the system put in place for the control works and gets things going, against all odds. And there are plenty of those in the path of any complex PC game that would ever dare make the leap to consoles, as numerous failed attempts over the years can attest, many of which I personally suffered through. There’s a lot to keep up with in Crusader Kings III, but the slower pacing of the game works to its benefit as you play it in this manner.

As with the PC version, there’s an extensive tutorial right at the beginning that helps ease you into Crusader Kings III, which in this particular case comes in very handy because even veterans of the series likely won’t even know how to work the new controls, making playing through the multitude of text boxes pretty much a must if you hope to get into this port. The barrier of entry is most definitely there, but it’s worth the effort, trust me. Also true to its computer counterpart, there’s multiplayer to partake on consoles, which at the time of this review wasn’t populated much at all due to the unreleased state of the game. Should be fun to take my machinations online for sure later down the line!

Crusader Kings III is expanding its campaign on PlayStation 5 and Xbox Series X/S – it’s included on Game Pass at launch, even – in a very serviceable port that you would be remiss to overlook. A controller is hardly a substitute for traditional keyboard and mouse controls, but the folks behind this port have done a remarkable job making the game work and play as comfortably as technically possible on a gamepad. This is a great port for those who might not have the means to play Paradox’s intense strategic sim on PC or are looking for a deep game to sink your teeth into on current gen systems.