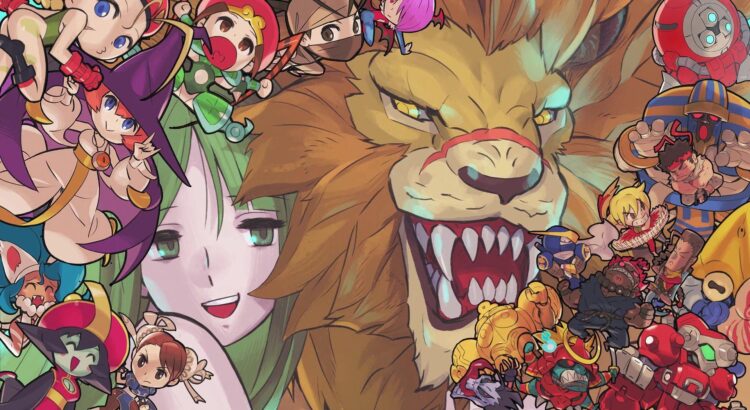 Let’s cut right to the chase: Capcom Fighting Collection is Capcom’s finest compilation to date. It contains ten of their best fighting games to date, some of which have never made it outside of Japan. If you’re a fighting game fan, you’ll be missing out if you don’t buy this collection right away, and even if you are not, there’s much to this that makes it worth your while.

The people that will come away the happiest, though, are the ones who’ve been clamoring for re-releases of any of the Darkstalkers games, as Capcom Fighting Collection happens to feature a whopping five different titles in that series alone. Relegated to practical obscurity since Capcom last touched it for a compilation of its own back in 2013 on PlayStation 3 and Xbox 360, Darkstalkers has always been a fan favorite thanks to its absolutely beautiful art design, charming cast of characters, and rock-solid gameplay all throughout its games.

Starting with 1994’s Darkstalkers: The Night Warriors, moving on to Night Warriors (1995), Vampire Savior (1997), Vampire Hunter 2 (1997), and Vampire Savior 2 (1997), Capcom Fighting Collection is very thorough with its treatment of these games, providing not only the basics like move lists, a laundry list of graphical filters that help bring out the beauty of their art, but also provides a ton of extra development material as well.

Darkstalkers as a whole is a series built on horror movie character tropes that coupled with Capcom’s 1990s golden touch when designing fighting games absolutely nailed it when it comes to being extremely fun and easy to pick up (but tough to put down!) games. They’re so beloved that even though it’s been 20+ years since the last official entry in the franchise, characters from Darkstalkers still pop up every now and then either through cameos in other Capcom fighters in the form of DLC costumes (such as the ones in Street Fighter V), or even as part of the roster in Vs titles like Ultimate Marvel vs. Capcom 3.

It’s been teased that a new game in that series might even be secretly in the company’s plans, and its coming to fruition hinges on whether or not Capcom Fighting Collection does well. While that might sound a little too hopeful considering the literal decades of demands from the fanbase for a new Darkstalkers, and even though it’s no more than a rumor, it’s the first time Capcom’s supposedly shown any interest in messing with that property. It’s definitely clear that they care about it just due to Capcom Fighting Collection’s mere existence and the extent of quality to which they made it, so it doesn’t hurt to hope.

And that’s not even touching upon what else this compilation has to offer. Yet another gem included in Capcom Fighting Collection is Red Earth, a previously arcade-only game released in 1996. It’s the wackiest among Capcom’s creations from the time – which is saying a lot considering Cyberbots, another game included in this that I’ll touch upon shortly! – a mix of fighting game and a RPG with drop dead amazing sprite work.

You get to pick from four distinct heroes and face off one-on-one against a gauntlet of bosses, leveling up on your way to ridding the world of evil during quest mode, but if you’ve got someone to play with, you can duke it out against one another much in the way of a traditional fighter. The biggest draw to Red Earth is definitely its single player portion as it’s quite challenging and enjoyable to play through due to how diverse the playable characters are, as well as the eight different bosses themselves.

Cyberbots: Full Metal Madness (1995) is yet another out there inclusion to Capcom Fighting Collection. It’s a one-on-one robot fighting game that only really saw release on the Japanese PlayStation and Saturn where you get to pick from a host of equipment and body parts that you combine into the fighter style of your choice. It’s also where Jin Saotome came from, who’s been part of both Marvel vs. Capcom and Tech Romancer’s roster as the dude with the white redband riding a huge robot arm into battle.

The fighting itself is tight and engaging as you’d expect from a Capcom game, but due to its setting that has huge, hulking robots fighting among themselves, Cyberbots’ pace is very unique when compared to something like Street Fighter. There’s a lot more weight and oomph to impact and damage during bouts which feels great when playing – plus, when you win, your opponent goes BOOM! With its array of robot art options and attacks, Cyberbot can get very competitive, and if the online fights are any indication, Capcom Fighting Collection might make it an underground hit among the community.

Almost rounding the collection out – pun intended! – are two of the chibi fighters from the mid 1990s, Super Puzzle Fighter II Turbo and Super Gem Fighter Mini Mix, which throw a host of different smaller-proportioned Capcom characters from both Street Fighter and Darkstalkers and have them battle it out. Puzzle Fighter is a stone drop puzzler in the vein of Columns and Puzzle Bobble, with combos acting as fighting moves as you go head to head against an opponent. Gem Fighter takes a more traditional approach and is a fighter, but a much lighter one at that, having gems acting as a power-up source that’s constantly being traded between fighters.

Both games have been absolute hits among fans, but somewhat more so in Puzzle Fighter’s case. It saw a home release on home consoles when it was new, but it was through its later Xbox 360 and PlayStation 3 port that it was most enjoyed thanks to its fantastic implementation of online multiplayer. Also known as Pocket Fighter, Super Gem Fighter Mini Mix saw a more limited release and was only ported to the consoles from the time it was new basically, with the last one being on PlayStation 2 in the Street Fighter Alpha Collection. It’s great to get to play it again via Capcom Fighting Collection for sure.

Last, but certainly not least, is Hyper Street Fighter II: The Anniversary Edition, a port of yet another revision of Street Fighter II that was released back when the franchise hit its 15th anniversary. Basically, it features the entirety of Street Fighter II’s numerous iterations under the same roof, allowing you to mix and match different versions of the fighters and potentially having ridiculously unbalanced matches. Each version retains their game’s mechanics, so for instance you pit a World Warrior character versus a, say, Hyper Fighting one, the latter will have the obvious advantage of a special meter, for instance, as well as the much faster speed and new moves that were introduced in that particular iteration.

All in all, Hyper Street Fighter II is a neat addition to the collection that will mostly appeal to those who are more deeply into Street Fighter II that will appreciate having the option to pick their favorite versions of the roster. For people not as familiar to the frankly silly amount of iterations that Street Fighter II had since its release 30+ years ago, it probably won’t be as exciting, but overall there’s much fun to be had anyway since this is Street Fighter II after all and it’s still one hell of a fighting game for as old as it is.

All games included in Capcom Fighting Collection can be played online in both casual and ranked modes, and the quality of play is excellent due to the inclusion of some of the most modern netcode technology available, known as rollback. It does its best to negate the feel of lag during matches by chipping away at the delay with which inputs are sent to the server, which helps keep the delay at bay. That doesn’t mean you won’t get any lag, especially when playing against people far away from your location, but it’s a much, much improved technology than the one that’s seen in more recent fighting games, and one that’s been the most stable around for a while at this point.

I’ve touched upon the historical importance of compilations such as this over my reviews, how their existence is important enough to warrant a special amount of care from their developers. That care isn’t merely to be relegated to making the games included play as well as or even better than they did when initially out, but also have content to go alongside them. Capcom Fighting Collection features a very decent amount of art files and documentation that cover the entirety of its roster, with numerous sketches, prints, and character portraits for each of the games included.

The Darkstalkers games in particular got a whole lot of attention in this department too, having some of the most amusing museum entries I would be a jerk to spoil, safe to say that for a cartoon nerd such as myself, it was a joy to see sketched animation frames included for just about every character from the original cast. It’s not an incredibly in-depth collection of art in any way, but it’s clear that Capcom’s heart was in the right place when putting it together since what’s there is extremely worthwhile to sift through for sure.

Capcom could go on for years and years just surviving via collections such as this. Their catalog is immense and there’s plenty of hits which players are hungry for in the current gen systems. The games included in Capcom Fighting Collection were among some of the most requested by fans and they should be pleased with how it turned out. If this is any indication to how they are willing to treat older games and update them to modern standards, more power to Capcom to keep releasing these!