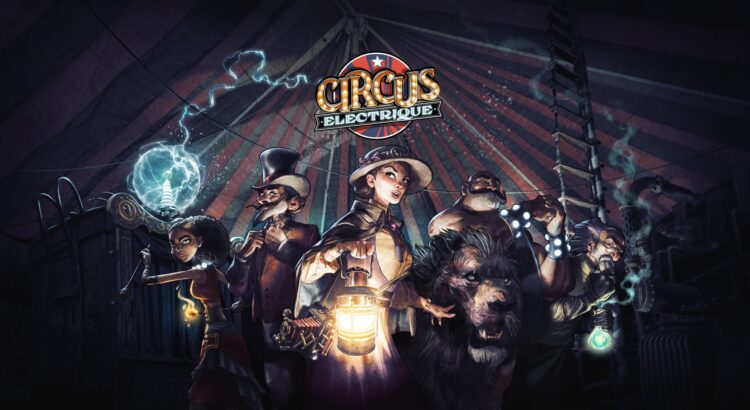 In Circus Electrique, 19th-century London has been transformed by the inventions of the powerful STEEM Corporation. Unfortunately, much of the population has also been transformed – into deranged killers. Intrepid journalist Amelia happens to be doing a story on her estranged uncle’s newly-reopened circus when “the Maddening” strikes. Uncle Randolph provides his star performers to act as Amelia’s bodyguards as she explores the stricken city. Before long, a steampunk circus is the only means of saving London, but the show must go on.

It’s a novel setup for a surprisingly involving combination of management and turn-based tactics gameplay. Hungarian indie outfit Zen Studios is mainly known as a preeminent maker of pinball videogames, but Circus Electrique successfully continues their expansion into new turf. Some may find the game’s progression a little slow, or feel that Zen are too obviously indebted to their influences, but this is a confident execution of a solid idea. An engaging steampunk atmosphere, interesting management decisions, and gradually evolving tactical battles make for a winning combination under the big top.

Where influences are concerned, there is no doubt that Zen Studios are very fond of Darkest Dungeon. Red Hook Studios’ 2016 game shifted two million copies, and is the template for much of Circus Electrique. The differences are significant, however. This game has a much more bright and breezy tone, and a reduced emphasis on punishing difficulty – although it has its moments.

Players will alternate between two separate, but tightly linked, layers of gameplay. In the tactical layer, Amelia explores maps of London districts which consist of a series of nodes. Some of these are stashes of loot or brief minigames, but most trigger turn-based battles. Conversely, the management layer focuses on running the circus itself. Each in-game day, players can put on a show – carefully deploying resources to earn the best audience reaction and rewards. As the reputation of the circus improves, new buildings and options are unlocked.

Performers are at the heart of both of these gameplay layers. In the tactical phases, they serve as Amelia’s muscle and need to be combined effectively to defeat mobs of unhinged Londoners. In the management phase, performers need to be deployed with care to exploit their synergies in order to put on the best possible show. Back at base, limited slots are available to rest up injured characters, train them, or have them work with an oracle to gather vital intel.

At first, both layers seem quite simple but Zen cleverly stage-manage a long and gradual increase in complexity. Resources become trickier to manage, new performer types expand options, additional enemies pose novel threats, and the decisions become more and more intriguing. The wealth of information on hand is clarified by an excellent UI, which is both easy to read and rich with a steampunk atmosphere.

Circus Electrique crackles with the energy of gaslit Victoriana. Amelia’s crack team of strongmen, snake charmers, clowns, illusionists and more are all lovingly rendered in 3D models with unique, expressive animations. The red-eyed enemies are amusingly outlandish and include bobbies on steam-powered unicycles, flame-throwing bakers, and irate sailors toting harpoon guns. All of this irreverent detail helps Zen avoid the big trap of this style of turn-based combat; Circus Electrique never becomes a monotonous grind. Putting on the shows – which are not viewable –  can become a little repetitive, but fortunately it isn’t mandatory to run one on every in-game day.

Possibly the biggest thrill that Circus Electrique lays on is the arrival of new performer types. Defeating the first boss, for example, unlocks the frail but enjoyably tricksy illusionist. The snake charmer is another game-changer, because their abilities allow some cunning manipulation of “devotion”, essentially a morale bar possessed by allies and enemies alike. Each class unlocked expands the options available in both the management and tactical layers, and provokes yet more head-scratching choices.

Inevitably, not all of the game’s gags hit the mark. The crafting system is a weak link in the management layer, because the means of acquiring the needed components is so arbitrary. The progression of performers is also a little underwhelming. While they periodically level up, the improvements to their skills come in tiny increments which rarely feel impactful. For this reason, the game can’t replicate the sense of attachment to characters that other tactical games provide. There is permadeath, but losing even an experienced clown doesn’t feel like a show-stopper. The story, too, is nothing to write home about – although the fact that it is fully voiced is a very welcome surprise.

Neither of the two layers in Circus Electrique would satisfy on its own. Of course, neither needs to – Zen Studios have built a game where two connected sets of systems continually reinforce each other. The result is an engine which keeps generating new problems and possibilities, sustaining the fun for hours on end. The combination of management and tactical elements might appeal to a relatively niche audience, but for that crowd Circus Electrique may be just the ticket.