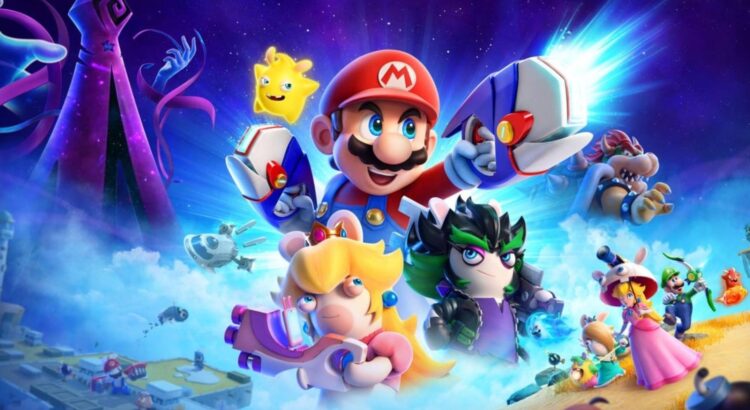 2017’s Mario + Rabbids Kingdom Battle was a sleeper hit. Hardly anyone put any hope in a product that proposed smashing Nintendo’s number one property with Ubisoft’s Rabbids, of all things. But game director Davide Soliani’s candid enthusiasm, along with his team’s at Ubisoft Milan shone through in the end, with an extremely fun game that brought turn-based cover shooting that’s most commonly associated to the X-COM franchise, of all things, to the Super Mario (and Rabbids) universe.

And here we are, five years later with a much anticipated sequel, Mario + Rabbids Sparks of Hope, about to grace the Nintendo Switch in a couple of weeks. The hands-on demo presented at Brasil Game Show 2022, the first edition of the show since 2019 due to the Covid-19 pandemic, gave visitors roughly 15 minutes to roll around the starting sections of the full game. And what a game it’s turning out to be. Once again, it makes use of Ubisoft’s proprietary engine Snowdrop, it’s absolutely eye-popping and shockingly sharp, especially for a Nintendo Switch title.

The demo opens with an innocent jaunt through Peach’s castle as Mario and co, including the Rabbid versions of Peach, himself and Luigi, are busy looking for Rabbid Mario’s overalls, which quite curiously have gone missing. This section worked as a tutorial of sorts for navigating Mario around, as well as getting to know all the characters, all of whom are hilariously written and even voiced, such is the case of Beep-0, the crew’s wise-cracking robot companion.

But things quickly turn dark, quite literally in the case of the demo, as Mario and some of his pals shift over to the back of a giant space stingray that’s been taken over by a mysterious malefic force. Enemies start popping out of every nook and cranny, so you guessed it, this is where combat is introduced. Right from the very get-go, comes Mario + Rabbids Sparks of Hope biggest change from the first game.

This time around, you’re given free range of movement during battle, instead of having to be stuck on a grid. There are obviously still limits to how far you can move, doing away with any arrows going around corners and into obstacles, which I never noticed before how badly they bogged the action down. Moving in and out of cover this way should quickly become second nature to you as it did for me in the demo, where I wasted little time taking out baddies.

The second biggest inclusion here, which works in tandem with the free movement are combo actions. In the demo’s case, Mario and Rabbid Peach could help each other get over gaps in the battlefield, or simply get further ahead, by performing a co-op jump, where the character that ends up getting launched will float and land somewhere hopefully safe and sneak into cover. This in particular is an even greater improvement over the first Mario + Rabbids as it makes combat even quicker and snappier, which was definitely an issue in Kingdom Battle.

Shortly after a couple of encounters, the team had to open up the way forward by interacting with some sort of egg that we kicked into the stingray’s many obstacles in order to get ahead. Soon following, a dramatic cutscene showed the rest of the crew coming to Mario’s rescue, Empire Strikes Back-style and with a clear reference to Back to the Future in the form of a flux capacitor – I DID catch that, surprisingly enough! – and back into the relative safety of open space.

That’s when some story beats started getting dropped. It seems that the one responsible for the clothing mishap from the beginning of the demo is apparently a Spark, a mix between a Rabbid and a Luma, those star creatures from the excellent and fondly missed by yours truly *ahem* Super Mario Galaxy series. And Rosalina, the caretaker of Luma and star of Galaxy, has gone missing, kidnapped by the villain.

Just what is their purpose? The demo wouldn’t say. The team decides to land on a marsh planet, where gameplay ended, but not before introducing a very curious and large Rabbid who seemed to have something to do with the local tribes. That, however, will have to be explored in the full game, and my oh my, I’m even more excited to try out come October 20th.

Mario + Rabbids Sparks of Hope feels like the natural continuation of Mario + Rabbids Kingdom Battle, with much welcome improvements that only go to make what was an already very neat and enjoyable time into an even better gameplay experience. There’s bound to be even more new elements in the full game, and I’ll be there with you to check them out in a full review.

Be sure to keep an eye out for more of our coverage of Mario + Rabbids Sparks of Hope in the coming weeks over here, at Entertainium.