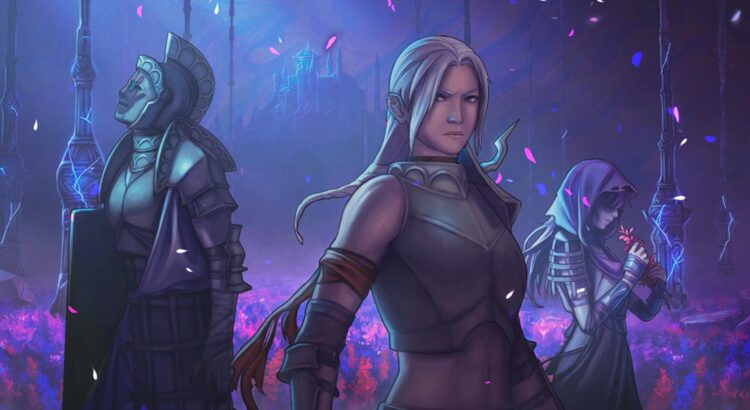 Shattered Heaven is the debut game of the newly-formed development house under the Leonardo Interactive banner, Leonardo Production. I had the opportunity of playing a preview build of the game at Brasil Game Show 2022 last month, and now, having had the demo in the comfort of my own PC at home, I was able to have a deeper dive into it in anticipation of its 2023 release.

The premise of the game is at the outset one very close to classic dark fantasy: humanity slayed god generations ago, and now, on the brink of extinction, looks to a group of heroes to save whatever’s left. They embark on a pilgrimage to a holy site in the hope of somehow attaining forgiveness from the heavens.

With danger lurking in every corner during their journey, four warriors from different corners of the realm have their work cut out for them as they make their way through some Slay the Spire-inspired dungeon maps. Each step can bring randomly generated story crossroads that have you decide which course to take and influence your run.

And of course, you’ll be fighting all manner of monsters during your travels. These encounters happen in the form of TCG battles. Each character in your party gets five cards at the top of every battle. Fights are turn-based and are rigidly conducted by a timeline located on the top-right corner of the screen. Your units get 2 AP each turn which can be spent on card actions.

Cards are split among three colors: red are attacks, blue are buffs/heals, and green ones work as support, wherein they can be considered jokers of sorts since their effects can vary quite wildly. For the demo, there was already a deck put together for testing purposes, and it did a good job at showing the degree of how deep Shattered Heaven can get in terms of possible combinations among your team’s powers.

Side by side with cards, each one of your heroes also has their own special powers that can be used every now and then, under a specific cooldown. For instance, paladin-ish Andora can put up shields for anyone in the party in order to withstand and deduct damage points from potential attacks.

There are mechanics unique to every unit that activate under special circumstances. Andora’s own deity skill comes into play whenever she uses a card from each color during a match, up to three. It specifically adds a tactical layer to a fight since once it hits max, granting the highest level buff at 3, which in this case grants her 2 extra AP on her next turn before going away.

Elements like that combined among your party’s arrangement of different classes and specializations help Shattered Heaven into being more than your usual run-of-the-mill turn-based card game, and something different from say, like Hearthstone. It’s also got a decent amount of lore to dive into too, which combined with its detailed 2D art help give the game some personality to come back to, on top of its gripping tactical card-battling gameplay.

I came out of the BGS demo quite impressed with what I saw in Leonardo’s work, and having had the opportunity to sit down and play it further at home, that feeling remained. Shattered Heaven’s approach to gameplay is heavily influenced by other TCGs that came before it for sure, but it has enough of its own flavor going on to make it something to look forward to when it’s finally out next year in March.