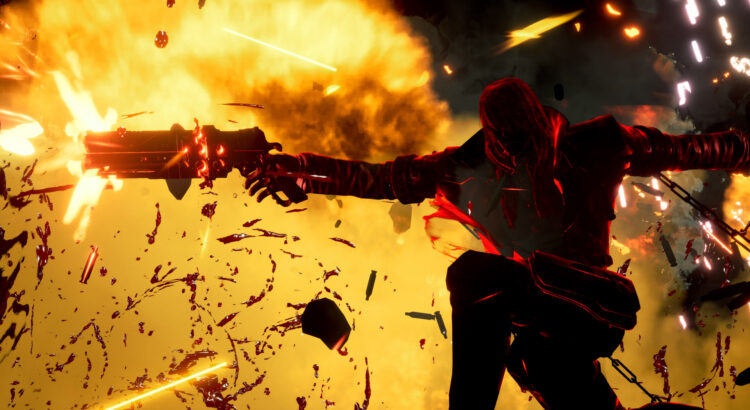 The Gungrave franchise is one that has languished in obscurity for almost 20 years. The original Gungrave was released in 2000 on PlayStation 2; a stylish third-person shooter developed and published by Red Entertainment (Sega in Europe). It got a direct sequel in 2004, Gungrave: Overdose, but developed by a different studio. Both games received fairly average reviews.

At the same time, the game received a television anime adaptation which ran for one series of 26 episodes. Since then, 16 years have elapsed with the series officially dormant, until 2017. Korean studios Iggymob and Blueside expressed an interest in resurrecting Gungrave for a new generation, and under the supervision of Red Entertainment, they released Gungrave VR, and now in 2022 this fully-fledged new sequel, Gungrave G.O.R.E.

Gungrave G.O.R.E. is a throwback in every sense of the word. This is a straight third-person shooter; no collectables, no open world, nothing except the shooting, action and occasional interstitial cutscenes. The game is set in a universe where a designer drug, SEED, has addicted much of the world and can transform people into horrific monsters.

You play as Beyond the Grave (better known as simply Grave) who was born as Brandon Heat but then died and resurrected as a kind of avenging angel/grim reaper. He is now the G.O.R.E., or Gunslinger of Resurrection. Alongside his friend and principal advisor Mika Asagi, Grave is tasked with taking down the criminal empire of the Raven Clan, who are distributing the drug. The story is conveyed through some really excellent looking CGI cutscenes, which look graphically far superior to the game itself.

Grave is equipped with dual pistols, named Cerberus. They have infinite ammo and while playing, you are incentivized to be continually unloading your pistols constantly. On Grave’s back is his giant metal coffin, Death Hauler. You can use the coffin for melee attacks, either swinging at enemies or whirling around and knocking rockets back towards soldiers. Special attacks also allow the coffin to fire devastating rockets, which can flatten a room of enemies in a single shot.

Gameplay of Gungrave G.O.R.E. is straight action. Each level is essentially a third-person bullet hell, with a non-stop barrage of enemies bombarding you constantly except for brief downtime while running along corridors to the next encounter. Most levels also end with a boss fight against another giant monster, sometimes a tank, sometimes a huge lizard. Most enemies shoot back but some are melee, running at Grave and trying to knock him down.

Missions are scored by killing enemies, but also through the number of bullets you shoot, and the stylishness of your kills. For example, you can grab enemies and throw them at others, or use your special skills to pull off acrobatic feats which reward their own score. Outside of the missions you can then use points you earn to unlock various abilities for Grave, as well as upgrade the effectiveness of his core pistols and other attacks.

While enemy variety is good, I personally found the shooting very lightweight and unresponsive, and it fairly quickly felt repetitive. Thanks to Grave’s regenerating health bar, he doesn’t particularly react when taking damage, meaning you can find yourself almost dead when surrounded by a bazillion enemies, as is often the case. Due to being incentivized for continually shooting enemies and using the grab ability to increase your “Art” score (by shooting foes in the head point-blank), the shooting just feels rather tedious, instead of fun.

However, it does at least always look pretty stylish no matter what you’re doing. As you continually shoot, various parts of the environment explode and destruct, with enemies either hurled back by your shots or literally disintegrating into gibs. This can result in the screen becoming almost a blur of viscera, bullets and bodies. Most environments are rather bland and are a combination of either industrial city streets, industrial building interiors or industrial corridors. Outside of the cutscenes, this looks like a game from the PS3 era.

There is also a heavily shredding guitar rock soundtrack somewhat reminiscent of Doom (2016) and imitators, although generally less memorable, especially as the same looping backing track tends to repeat infinitely when you’re not actively engaged in a battle. It’s a soundtrack that wants to invoke its chaotic and epic personality but it doesn’t feel like it was directly written to suit whatever action is taking place on screen.

Gungrave G.O.R.E. is the kind of game that is going to appeal to two different groups of people: Fans of the original two games, or people nostalgic for this particular style of bullet hell third-person shooter. Returnal in 2021 is an example of this kind of game done in a modernized format with some Roguelike elements, while Gungrave G.O.R.E. deliberately eschews any modernization in an effort of being an authentic, era-appropriate experience. If you’re in the mood for some over-the-top action and can stomach some repetitive shooting, Gungrave G.O.R.E. will satisfy that itch.