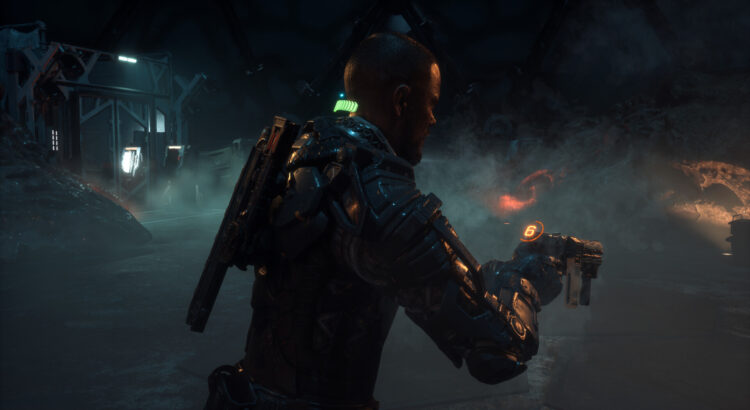 Glen Schofield’s studio Striking Distance’s debut title, The Callisto Protocol, is admittedly a work based on most of the team’s previous work in Dead Space, when they were still part of Visceral Games. Even though it’s certainly a technical showcase, The Callisto Protocol lacks the atmosphere and pacing that made Dead Space so great to begin with, resulting in a game that isn’t scary at all, but just a plain gross, gory show that has no punch to speak of.

The Callisto Protocol opens with a bang. As the space trucker Jacob, you crash land on the Jupiter moon of Callisto while going on a supply run to the local Black Iron prison. A rebel group is apparently responsible for the deal gone wrong, and upon being rescued, you’re put in prison as a regular inmate, along with the sole surviving member of the apparent terrorists. It’s certainly one hell of a start, rivaling that of a high budget action movie, with plenty of visual and audio flair.

Unfortunately for Jacob, his troubles upon getting to the prison are just the tip of a very high shit pile, since pretty much as soon as he checks in, it all goes to hell in a handbasket. The whole place erupts into chaos when a mysterious affliction begins to change every human there into horrible, deadly mutants, and his only chance at escaping the ordeal is to beat the ever-living crap out of anything that stands in his way before they get a chance to rip his face off, or slash him in half, or gouge out his eyes, or…. you get it, right?

And there’s certainly going to be a lot of chances at that happening since The Callisto Protocol’s combat is sort of a mess in many ways. For starters, Jacob is a very stiff, slow moving character. Coupled with the weaving and bobbing that the all too simplistic melee system in the game has you doing and the overall strength, resilience and aggressiveness of the enemies and the relative weak state you start the game at, it all makes for a brutal experience right off the bat, even on the normal difficulty setting.

Speaking of bats, your initial means of defense is a pipe, which moments later is replaced by an upgradeable stun baton. The actual hits and crunches when properly getting attacks in feel great as they should, but due to the clunky implementation of dodging, which is used interchangeably to the left and right, and back for blocking, much like in a very watered-down version of Punch-Out!! without any sense of timing or countering applied as an attempt to offer minimal depth to combat. Meaning that it doesn’t matter which side you dodge to, regardless of where the attack is coming from, you don’t get hit.

When you pick your first gun up, encounters do get a tad more involved, since the more hits you manage to land, you eventually get the opportunity to get a shot in, which can help end engagements more quickly. Sadly, though, the more you invest on your ranged arsenal, the less you end up going for hand to hand kills due to the sheer abundance of ammo and the ridiculous imbalance of power between melee and ranged attacks. It’s just more convenient to use bullets after a certain point in the game.

The Callisto Protocol’s greatest weakness, though, it’s its total lack of horror. For a game going for that vibe, it’s an absolute bummer. Once you’ve seen the first few jump scares such as monsters coming out of grates or somewhere behind you, or the game’s equivalent of the Alien facehugger jumps out from a chest or locker out at you, you’ve seen it all. The Callisto Protocol repeats the same scare tactics over and over again, and they quickly become predictable to the point of being comic in the course of its 10-hour run.

Once you know that regardless of how you fight, creatures will eventually die after shooting or whacking them enough times, even the sense of tension goes away completely when playing. Dead Space, even with its silly looking necromorphs, knew how to amp that up, keeping you on your toes when it came to its encounter design, but The Callisto Protocol merely throws more waves of shambling monsters at you as a means of ratcheting up the action.

The big thing with Dead Space was how the main thrust of the combat was the cutting off of limbs, the means of definitely taking down a necromorph. The Callisto Protocol apes on that concept by dropping in tentacles in place of those a third of the way into the adventure, with plenty of blood-scrawled graffiti to make sure that you get that shooting or cutting those off is paramount, unless you want to see more powerful mutants stand back up and attack you. Oh, and yeah, you should also stomp bodies for loot. Repeatedly. Just like that other game.

That’s not to say that Striking Distance did not nail the design of its creatures or locations. The Callisto Protocol has some of the most disgusting monsters I’ve seen all year, and the blood (or any other human excretion or secretion) dripped places you visit in the game are downright nauseating. But it’s all wasted when the atmosphere is so predictably thrown off by the pacing of the scares and the lack of variety when it comes to providing the terror that it is to slowly and carefully prowl around in an unpredictable location.

Predictability also comes in the way those places are put together with combat in mind. Whenever you see grates, spikes on a wall or big turbines, you can tell you’re about to get down and dirty with some monsters, or will do so at some point in your mapless comings and goings. The game’s equivalent of Isaac Clarke’s PK manipulation can be put to use to push them into those to become mincemeat, adding even more gore to the already beyond-all-hope filth of the places you skulk around during The Callisto Protocol.

It would also be enjoyable to get to explore the settings of Callisto without worrying about getting locked ahead without any recourse to come back. Even the save system in the game is tricky in regards to that – it gives you the opportunity to save but only before the very next automated checkpoint. Once that takes place arbitrarily, your save is nullified and takes away the chance to simply go back and check what you might have missed, unless you start a new file because there’s no chapter select to speak of here.

Adding in the overall sense of power that you quickly accrue as you upgrade weapons and skills, it’s no wonder that nearing the halfway point of The Callisto Protocol its inception as a side hustle to the bonkers battle royale PlayerUnknown’s Battlegrounds became clear. There’s no power creep to speak of, and even the supposedly deadly automated prison defense robots turn into nothing but walking sources of valuable loot that go down way too quickly.

It’s a shame because The Callisto Protocol certainly has plenty of production value, with some Hollywood talent – like Transformers’ Josh Duhammel as Jacob, Karen Fukuhara from The Boys who plays rebel member Dani, as well as Days Gone star Sam Witwer who plays the typical asshole prison captain – who all provide their likeness and voices to the fantastically modeled and animated characters. The music is also excellent and tries its best to build up during action scenes and play down during the few quiet ones in between.

I wanted so much to bask in the intended horror that The Calisto Protocol promised in the months leading up to release, but that wasn’t the case when the time came to play it. While it’s surely not an awful game by any means, with flawed but in the end very crunchy feeling combat, it’s simply not in the same league as its inspiration when it comes to providing a scary or even tense experience. It’s still a very graphically impressive and positively disgusting game for sure, and for some that might be enough as it is.

2 thoughts to “Review: The Callisto Protocol might not be scary, it’s just really really gross”