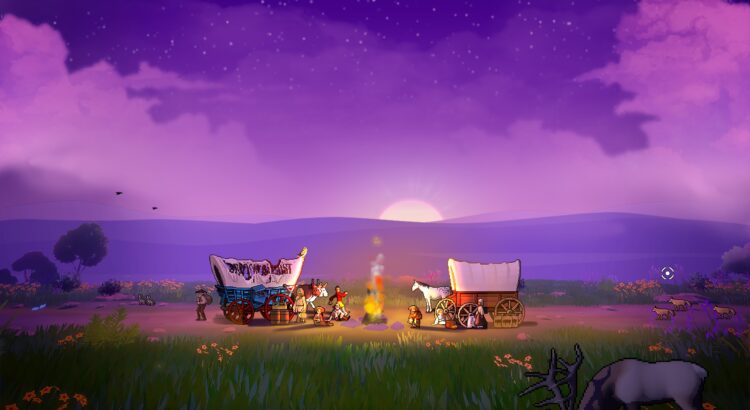 I’ve always had a soft spot for edutainment games like The Oregon Trail. Growing up they were probably my main gateway into video games, with a variety of Dorling Kindersley Multimedia games like Castle Explorer or My First Amazing World Explorer. These are a variety of games which for children these days effectively no longer exist, with new edutainment restricted almost entirely to mobile apps. But there was a good 10-15 years from the early 1990s to the mid 2000s when educational games reigned supreme.

But decades before that, The Oregon Trail began trailblazer as one of the earliest games in the genre. The original text-based game was developed by the Minnesota Educational Computing Consortium (MECC), who went on to develop many sequels in the franchise as well as the spin off Amazon Trail and Yukon Trail games. In the late 1990s, MECC was acquired by SoftKey, and since then various companies have built several different iterations of the game.

This newest version was developed by Gameloft and first released exclusively for Apple Arcade in 2021, before getting a PC and Switch release this year. It comes packed with not only the traditional Oregon Trail journey, but also additional adventures including the California Trail or the Gold Rush. Your goal, as it has always been, is to get your group of settlers from Independence, Missouri to the Willamette Valley in Oregon, without the party dying of various ailments and accidents.

This version of the game also seeks to address some of the historical revisionism and racism that was present in earlier versions, and was designed in collaboration with Native American scholars to make sure that their voices were adequately represented. Thus for the first time, your group of travellers can include Native American characters, as well as meeting and interacting with many such peoples along the journey.

You can see from the UI and visuals that this version of The Oregon Trail was primarily designed for mobile, although it has been ported proficiently to PC and works well with a mouse. Despite its mobile-first approach, the actual mechanics of the game are the same as usual and have not been simplified or stripped down.

At its heart this is a choose your own adventure game combined with some inventory management, and a few minigames. This combined with the many different random events which occur along your journey can affect how challenging the trail is going to be, and whether your party will survive. You need to manage having enough food, making sure your wagon is adequately repaired, as well as providing for the hygiene and morale of your travellers.

Often, things can and will take a turn for the worse. On one journey, my party became thirsty and drank contaminated water, three of whom contracted cholera. While medicine can cut down the recovery time it won’t immediately heal you, leading to a trade off of wanting to push forward with the journey, or risk resting and having your food supplies run low. Trading is often very important, as people will barter for items you have, and stores are few and far between.

Despite the simplicity, I found myself getting very involved in the rhythm of the game. As your group trudge between locations, you’ll occasionally see animals on the roadside, which if you’re fast enough can be clicked on for XP. Likewise there are hunting and fishing minigames; the fishing minigame is more straightforward while the controls for the hunting feel deliberately clunky.

I also really enjoyed the game’s art style which merges 2D pixel art characters into a 3D rendered environment, with a nice tilt-shift effect which gives everything some depth even though you’re only ever viewing the world from a static, side-on view. Likewise, all of the game’s music is excellent; it could probably have done with a few more tracks, but everything that’s there is toe-tappingly memorable.

The Oregon Trail is absolutely one of the paramount classics of the edutainment games genre, and this newest version pays homage to that history while also introducing plenty of new content, and being more inclusive in its treatment of Native Americans. With plenty of unlockables, different modes, collectables and quests to undertake on every journey, the variety of things you can encounter means no two expeditions are likely to be the same. Plus, it might teach you a thing or two about 19th Century pioneer life along the way.