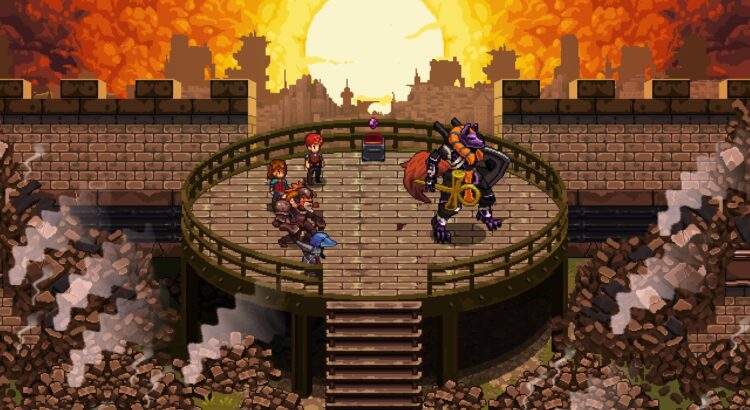 I confess upfront that the number of JRPGs I have played is really rather small. I’ve only ever properly dipped a toe into the Persona franchise, having greatly enjoyed Persona 4. But for the classic era, Chrono Trigger, EarthBound or old-school Final Fantasy titles, I didn’t grow up with any Nintendo consoles so I missed out. Nonetheless, I appreciate a good story and good characters. Chained Echoes, I’m glad to say, has both.

Chained Echoes deliberately evokes the SNES era of JRPGs in this aesthetic and style, but is more modern in its design. The game is set on the continent of Valandis, where a long war has raged for hundreds of years until in the game’s prologue, a massive explosion in a coastal city triggers an uneasy end to open hostilities. However, the people primarily responsible for causing the explosion managed to survive, and have to deal with the guilt of what happened while also preventing it from possibly happening again.

There are many characters but the leads are the red haired Glenn, a merc who is also a mech pilot, Kylian, Glenn’s friend and former commanding officer, Lenne, who is secretly a princess, and Sienna, a master thief. The story takes a little while to get going and it opens in a fairly unexplained fashion, throwing you into the world in the middle of the action and expecting you to make sense of it, but the themes and characters build throughout the course of the story. The characters are well developed and likeable, while the dialogue is nicely written. There is no voice-acting, but the story is good enough to keep you engaged.

If you’ve played a JPRG before you know the backbone of the gameplay, which is exploring the overworld and various dungeons, talking to characters, and then regularly engaging in turn-based battles. The world is expansive and there are plenty of hidden chests with goodies to find, and the wonderfully designed locations means that exploring always feels worthwhile.

The traditional turn-based combat with a standard attack and various magic-powered special attacks is augmented with the addition of the Overdrive system. This is basically a party-wide cooldown timer; taking aggressive action such as attacks and spells will raise the overdrive metre, while defensive measures will lower it. Keeping your party in the green zone will grant certain benefits, such as reduced incoming damage, or reduced skill costs.

However, if you take too many aggressive actions you can overheat, meaning the party will be vulnerable to receive increased damage from foes. This system means each fight is a trade-off between defensive and offensive turns, which does add some variety to the battles. Thankfully you can also use inventory items without exhausting a turn, and at the end of every battle, HP and SP are auto-recovered, meaning that you never have to worry about starting a tough battle with low health.

Visually the pixel-art is a pitch perfect recreation of the SNES-era graphics, but with even more detail than was possible at the time. The environments are large, lush and detailed, with a vibrant colour palette which helps to increase variety and bring the world to life. Both the characters and environments have plenty of style and beauty, especially some of the larger character art which pops up when characters are talking.

It’s also great to report the soundtrack is a total banger, absolutely evoking the same drama and style of the classic era of JRPGs, particularly Chrono Trigger. Composer Eddie Marianukroh has done some great work here, and the variety of different styles of music, from battle themes to town music or during dialogue background all feel just right.

The game runs fine on PC but it has clearly not been optimized for PC controls, meaning that it doesn’t use a mouse at all (keyboard or controller only, which can be rebound). For a game like this it doesn’t really matter too much as there’s nothing timing-based to worry about, but it does make inventory management and taking battles a bit more long-winded.

As a game which was created primarily by a sole developer, Chained Echoes is an impressive achievement. Chained Echoes is a must-play both for fans of old school JRPGs as well as story-centric role-playing games. Its innovative augmentation to traditional turn-based combat, beautiful art style, and engaging story definitely help to make it stand out in the genre. It successfully appeals to the nostalgia for this kind of SNES game while also managing to carve out its own style in terms of worldbuilding and gameplay.