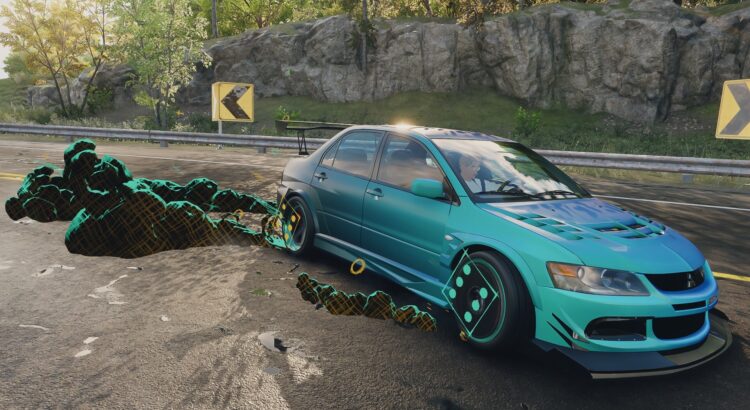 With Need for Speed Unbound, the series gets its 25th entry since it launched in 1994. Electronic Arts have enjoyed 150 million sales in that time, but quality has been inconsistent in recent years. With this entry, Criterion Games have been put back in the driving seat after a decade’s absence and the decision has paid off. Unbound is a superbly appealing arcade racer, full of thrilling and meaningful events, and a clear high point for the series.

The game was announced at quite short notice, in October. At that time, one feature stood out above all – the flashy, graffiti-style visual effects that Criterion have applied to cars in motion. These, and the vivid cartoon-like characters, make a strong first impression in-game. Once the shock of the new wears off, Unbound can seem surprisingly similar to 2019’s Heat in gameplay terms. Further play reveals, however, that Criterion have made a number of subtler changes, which add up to a genuine rethink of how Need for Speed works.

This time around, the setting is Lakeshore City – a fictionalised analogue of Chicago. Naturally, the city and its environs are a playground for a diverse cast of illegal street racers. Lakeshore has a cartoonishly corrupt mayor and a comically overfunded police department. This is, in short, an NFS game. The story is more minimal than that of Heat, with fewer cutscenes, and it rarely expects to be taken in any way seriously – these are clear improvements. What Need for Speed Unbound does most differently though, is the structure of its story mode.

In Heat, players could switch at will between day and night. In Unbound, day and night are distinct, alternating phases of play separated by visits to a safehouse. The campaign is divided into four weeks, leading up to a climactic tournament, “The Grand”. Crucially, the economy of cash and cars is far tighter than you might expect. Particularly in the first week, cash rewards are small and chances to buy or win a new car are rare. This has a number of interesting implications.

Most obviously, every dollar counts. This lends special importance to each and every race, because higher placements bring more generous rewards. It also adds drama to the frequent police chases, because being busted before reaching a safehouse means losing all of the cash won during that particular day or night. Suddenly, Unbound raises all kinds of strategic questions about which events to enter and how much heat is acceptable. This arrangement takes some time to click, but eventually every part of the game adds to a clever interplay of risk and reward. It’s a sometimes bracingly new way to look at racing.

Of course, it helps that the driving feels great. The handling model here is broadly similar to what Ghost Games devised for Heat, but there are greater customisation options. The tight economy means that players will form a deeper relationship with each car they acquire; it is far cheaper to customise a car than to buy a new one. New cars can take some getting used to. The cars at the top tier, S+, are almost terrifyingly fast and their immense power must be reined in with smart braking.

The most interesting new driving feature is burst nitrous. Existing in addition to a standard, slowly-charging nitrous system, burst nitrous is deployed with a single button tap. It is recharged not over time, but by actions like drafting, drifting, and executing grip turns. It’s another clever inclusion by Criterion, which incentivises playing well and learning these systems. Whether in a race or battling with Lakeshore PD, it is tremendously satisfying to build up burst nitrous, deploy it for a surge in speed, and then build it up again – sometimes within a few seconds.

Racing around the city is a constant thrill in Unbound, and the challenging races and tight economy add greatly to this. Exploring the cities in open-world racing games often feels a bit pointless, but here it feels worthwhile – partly because hunting down collectibles is another source of scarce cash. Purchasing formidable upgrades and especially cars feels like a major milestone; using these to win races feels like a triumph.

Where Unbound falters a little, at least at launch, is online. The multiplayer mode feels a little undercooked at this point. It operates on an instanced model which recalls Grand Theft Auto Online. Each instance contains 16 players, and any player can initiate a playlist of races for others to join. One issue is that playlists rarely reach their cap of 8 players and races are less thrilling with only 3 or 4 drivers in contention. Playing online without friends can feel overly similar to solo play – although to be fair, this is partly because the AI rivals are quite impressive. EA promises a major update in late January, so hopefully Lakeshore Online will begin to feel more fleshed out.

It seems clear that Need for Speed is in safe hands now that it has been passed back to Criterion Games. The British studio has taken what Ghost Games achieved with Heat, and improved on it in numerous ways. The refined handling model and tighter economy make for some of the most tense and exciting racing around, and it helps that the game is rock-solid on the technical side. Need for Speed Unbound is a surprisingly excellent racer, and one which will hopefully continue to improve in the months to come.