In 1884, a schoolmaster in England called Edwin A. Abbott wrote a short novel called “Flatland: A Romance of Many Dimensions”. In it, he imagined a world inhabited by purely two-dimensional creatures, which lived their lives not knowing the existence of depth. Fez takes a few cues from Flatland in its initial premise, but instead of a sphere introducing protagonist Gomez to the third dimension, it’s an enigmatic cube called the Hexahedron. The cube bestows upon Gomez a magical fez which allows him to bend the fabric of reality and see what was previously hidden; the ultimate knowledge of 3D. Shortly afterward, however, the Hexahedron mysteriously explodes into 64 pieces, and thus it falls to Gomez to find them. This is the story of Fez in a nutshell.

Fez is a gorgeous game with a lot of heart which uses its primary mechanic of shifting perspective to excellent effect. But when you get down to it Fez contains a plethora of illogical, obtuse, and poorly constructed puzzles which require the player to physically stop playing in order to work them out for themselves. If you’re an amateur cryptologist, Fez may be the best game ever made. For everyone else, you’ll be scrabbling about on the Internet for most of the answers in order to complete Fez properly, which is both counter-intuitive and irritating.

Most of Fez’s main gameplay involves navigating gorgeously created 2D worlds reminiscent of Braid, Super Mario, or the original Legend of Zelda. You jump, run, and frolic across levels, admiring the local wildlife and traversing the scenery. Locales range from crumbling ruins to lighthouses, forgotten cemeteries, mausoleums, and rain-soaked urban areas. Initially your goal is to collect various cube fragments that have been scattered around the world. Eight fragments create one full cube, of which there are 32 in total. Alongside this there are also 32 anti-cubes to collect which are all-together much tougher to find.
To reach most of these fragments, you need to make use of the shifting mechanic, whereby the entire world rotates 45 degrees to the right or left. This will reveal previously hidden paths, or create ledges where there might have been none. Shifting is remarkably easy and once you get your head around the idea, and discovering the correct route across a level becomes very intuitive as long as you can visualize what you can’t see. The platforming is just as simple, with the controls feeling tight and accurate. The music helps to set the ambience perfectly, expertly evoking a pleasant yet mysterious feel. The tunes themselves are very reminiscent of the kind found Superbrothers: Sword & Sworcery EP, which used music to great effect in 2011.

Graphically, Fez is utterly captivating. The worlds are meticulously put together and inhabited by either cutely stocky people living their suburban lives, or by whimsically emotive creatures like owls, caterpillars, and seagulls. During the adventure you’ll visit a wide variety of locations, from collapsing ruins of forgotten civilizations to a neon-infused Japanese-esque area, through old cemeteries and giant forests. The variety of places means it’s always a delight to be presented with a new environment and work out how to navigate around it. The map however, is complex and somewhat cumbersome, seemingly purposefully designed to make it difficult to visualize where you are. For a lot of the game you’ll be backtracking to previous areas to find remaining secrets, and it can be quite time-consuming if you haven’t discovered the secret passages. Considering the various technical woes which plagued the Xbox 360 version at launch, it’s good that Fez plays and runs fine on PC and is also being promptly patched when issues do crop up. 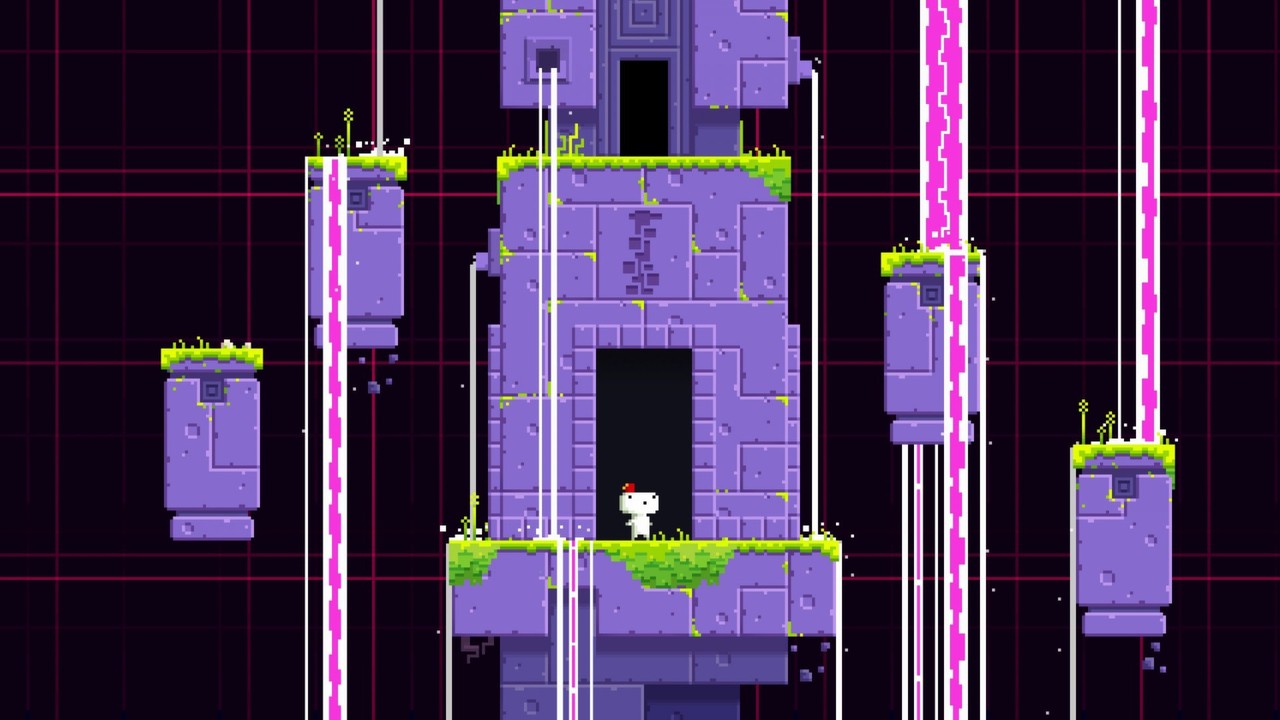 Fez’s main pitfall is its more complex puzzles. Once you’ve collected the 32 standard cubes scattered around the world, you’ll need to start deciphering the answers to the 32 anti-cubes. For most of these, you might not even be aware there is an anti-cube waiting to be discovered, since the game very rarely signposts where a puzzle exists. The upshot of this is in much scrambling around the world looking for mysteries and spending a lot of time looking at the map to see which rooms are not marked as completed. A lot of puzzles involve memorizing a sequence of movements (ala the Konami Code) and being in the right location when you input the code. Correctly completing a movement/shift sequence rewards you with an anti-cube. Discovering the sequences involves deciphering numerous signs, symbols, and images that are sprinkled about levels, mainly as background decoration.

There is actually a whole alphabetical, numerical and spatial code waiting to be unearthed, but decoding is another matter. Ninety percent of the time you will have no idea whether you have enough information to solve a puzzle immediately, or if you need to come back later. Fez never outright tells you to decipher anything, never provides you with any information to kick-start your quest, and never provides any hints. It is commendable that the game doesn’t treat you like an idiot and handhold you, but its complete lack of helpfulness is downright maddening. If you properly want to crack the code, you literally need to stop playing the game and work it out on pen and paper. Some, such as cryptologists or trainee linguists may find this fascinating. The vast majority of the population, however, will defer to looking up the solutions on the Internet, which entirely defeats the point of a puzzle game. Indeed, the solution to one puzzle was only found because it was brute forced through trial and error, not because the solution was discovered in the game world. When a puzzle forces you to look up answers because it fails to provide you with adequate information to solve it, the puzzle has failed. Likewise, Fez fails to prepare the player for its complexity and obtuseness, and only the dedicated will be able to work out its mysteries entirely on their own.

Fez is a stunning game to look at and a joy to wonder through, but it’s not such a joy to puzzle over. Although you will have great fun navigating and traversing the colourful and vibrant worlds, actually discovering the solutions to the confusing, frustrating puzzles will exhaust much time and energy unless you look up the answers, which is recommended if you want to complete the game in a timely fashion. It’s a shame Fez breaks a core tenet of game design so badly, because underneath the obtuse puzzles is a stunningly imaginative experience.