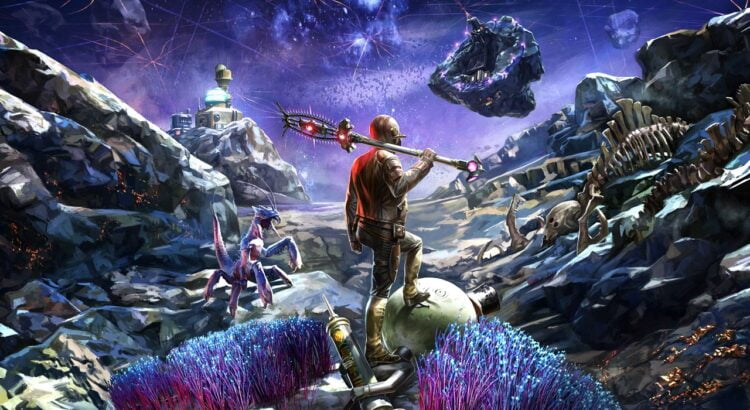 The Outer Worlds’ inherent gray morality is one of its biggest strengths, and is something that makes for good reason to replay its story more than once in order to see all possible outcomes since they’re so all over the place. Peril on Gorgon is the first piece of two DLCs, and like the base game, it’s rooted on the same notion of just how insane things could get in an unhinged capitalist universe in the far future.

Peril on Gorgon is a five- to eight-hour story campaign — depending on how close you stick to the main story — that takes you to a brand new planet that used to be the site to a Spacer’s Choice research facility, now home to bands of marauders and scrappers in search of lost treasures. In order to start, you’re going to need a saved game made at any point after finishing the “Radio Free Monarch” main quest and before engaging with the point of no return in the campaign.

As soon as this DLC is installed, you’ll be notified of a mysterious package that’s being delivered to your ship containing a severed arm and a message from an old friend of the original captain of the Unreliable. It urges you to head to a new blip on your map, Gorgon, and pick up an investigation where he left off with promises of riches and glory. Where have we heard that before, hm?

When you land at an asteroid just outside the planet, you meet Wilhemina ‘Minnie’ Ambrose, daughter of the head researcher from Spacer’s Choice science base who was developing a miraculous wonder drug called Adreno-Time which was supposed to up worker efficiency by doing away with tiredness and lack of concentration in the workplace.

Sadly, as it’s usually the case with anything to do with Spacer’s Choice, the proverbial shit hit the proverbial fan and the project was shut down through no fault other than their own, following a series of catastrophic experiments that ended up creating the marauders. Ambrose wants you to head down to the research facilities and track down her mother’s journal so she can clear her family’s name since they ended up taking the blame for everything that went down.

Things aren’t that simple since the entire facility is on lockdown, and in order to find a way in, you’ll have to scour all over Gorgon for clues which will take you to a few of the previously explored locations of the original content. That’s not mentioning the mysterious figure bent on halting your progress, ambushing you every so often. For as much as the story conceit makes Peril on Gorgon out to be an active investigation, it ends up being more of the usual A to B to C style of questline you’re probably used to, with plenty of combat and doc reading in between.

Still, if you are willing to go out of your way, there are a few neat side activities to partake in that end up having you be a little more observative, like tracking down items in a scavenger hunt for a secret society of nerds, as well as going on a tripped out charting adventure with some stranded adventurers, which provide some of the more colorful times in the DLC.

Thanks to the Obsidian brand of quality writing, though, while the actual partaking of the quests is nothing you haven’t seen in the base game, it’s still extremely cathartic to do so if not only for the excellent back and forth. It’s even better if you have leveled up those skills for your character allowing you to explore some really amusing options.

This includes your own party members who have their own new lines that reflect their opinions about everything that goes on in the DLC and factors in who they end up partnering with since you can take two of them out every time. I’ve always been partial to the Vicar and Parvati, and their exchanges all throughout proved to be worth listening to given their conflicting moral senses.

Following the open-ended nature of the game, there are plenty of possible avenues you can take in order to finish the story, including just killing every single person you come across, one of my favorites. Of course, by doing that you’ll obviously miss out on the writing and eventual gear and cash rewards, but hey, it’s a fun and totally feasible way to play that’s usually impossible in other open-world games. That makes it worth going back and playing through Peril on Gorgon more than once, if not only to see the consequences of your meddling.

The new planet you get to explore is full of structures to explore and scavenge for loot, not to mention plenty of powerful enemies to fight with. The encounters throughout Peril on Gorgon are some of the toughest you’ve probably had up to this point, too. Gorgon features a lot of eye candy, and like the rest of The Outer Worlds, you’ll want to look up every now and then as its sky is absolutely gorgeous. Sadly, the new gear that can be found are mostly re-colors or slight variations of the ones you can find in the base game, with a few exceptions, namely a handful of armor sets.

As a whole, this DLC feels a lot like the ones in the Fallout games, like Fallout 3’s The Pitt or New Vegas’ Old World Blues, that is, an isolated adventure from the rest of the core content that’s enjoyable for while it lasts without having much of an influence to what goes on in the game as a whole. Sure, some of its story developments might help you understand more of what goes on in the background especially when it comes to the workers’ plight under Spacer’s Choice thumb, but none of the actions we take in Gorgon are of any real consequence to the rest of the game.

For as by the numbers it might be in terms of quest design, Peril on Gorgon is a worthwhile trek if not only for the quality of the writing is as strong as it’s ever been, not to mention the raised level cap that includes new skills past 100 points, as well as the shiny gear and the number of new perks and flaws that pop up as you reach level 33. If you’ve been looking for more to do in The Outer Worlds, welcome to Gorgon! Hopefully you’ve kept a suitable saved game that will allow you to play through this DLC.