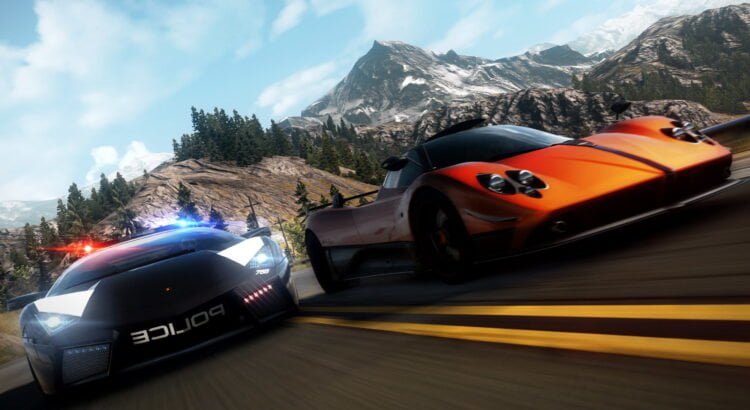 Almost ten years after the original release, the reboot of Need for Speed ​​Hot Pursuit is back as a remaster. Can the arcade racer, with his wild chases and speed frenzy, still spark the fascination from back then? Let’s get behind the wheel once more and visit Seacrest County to find what’s new.

And, well… not much. Unfortunately, you will only find it in the beginning: compared to the original release from 2010, the graphical differences are limited and it almost looks as if EA, Criterion and Stellar Entertainment had quickly run the assets from the past through an upscaler and updated them for the new consoles. If you take another look at the 360 ​​and PS3 versions, however, the improvements are more obvious. The edge flicker is still present in the beginning, but no longer as pronounced as it was then and there are finer textures to be seen. However, they did not even invest in HDR support for this remaster, although it would certainly have looked good through the various weather conditions, times of day and car models.

On PS4 Pro and Xbox One X, you can at least choose between two graphics modes: “Quality” and “Performance”. I would strongly recommend the latter to you: 60 fps makes a noticeable difference, which also has a positive effect on the arcade controls with its casual “brake to drift” system. Although the steering remains a bit spongy, it still reacts much faster and more precisely than in PS3 and Xbox 360 times (except in quality mode, which should be avoided – unfortunately, on base consoles, you are locked to 30 fps).

However, you can only drive with a controller: As with the latest Need for Speed titles and the recent Dirt 5, there is unfortunately no support for steering wheels. That was already the case with the original on PS3 and PC, while you could use the additional peripherals on Xbox 360.

In terms of content, you get a little more offer than before, since all DLC packages from back then are also integrated and not only the number of events but also the size of the vehicle fleet grew a bit. However, scrolling through the car list can be a real eye-opener to car fans: while some of the models were cutting-edge in 2010, today they are almost perceived as old-timers and some more recent vehicles from exotic and supercar manufacturers are missed. This is not a problem per se, but a small update to the fleet would have been a nice move from EA.

At least, the secret star of Hot Pursuit is back: the Autolog system, in which Criterion set new standards in asynchronous competition and, to my surprise, is still active for the old platforms today. Even in current racing games you rarely find comparable features where you are constantly kept up to date on the activities of friends and are immediately encouraged to race again as soon as your personal best has been beaten in the numerous career events. Of course, Autolog only really comes into its own when you have as many people as possible on your friends list who are fighting for places on the ranking list.

To make things a little easier, the remaster now also supports cross-platform play compared to the original. Just like Activision does with Call of Duty, you have to connect to friends on other systems using a separate EA ID generated automatically by the game. This not only benefits the results on the Autolog Wall, but of course also the direct online duels in various game modes, in which the starting field can extend across all platforms. You can also deactivate the corresponding option in the settings if you prefer to stay in your own ecosystem.

EA, Criterion and Stellar Entertainment should have done a little more for the new edition of Need for Speed ​​Hot Pursuit. In addition to a pepped up HDR look and steering wheel support, I’d love another revision of the controls, which thanks to the 60 fps option are a bit more responsive than the original, but still lack the last bit of precision (and actually in quality mode feels just as spongy as it did back then).

The excessive rubber banding from AI opponents has also been retained and although it causes a constant scramble in the dense field of drivers, it also strains the nerves and makes the boost almost superfluous. The option for cross-platform play undoubtedly speaks in favor of the remaster, with which the already terrific Autolog system and the multiplayer modes are even upgraded a bit.

In the end, Need for Speed Hot Pursuit Remastered retains almost everything that made it a hit back in 2010. Races are filled with adrenaline, audio is excellent, the graphics (which were lightly updated) are still quite convincing.

For those who still have a copy of it on PS3 and Xbox One and want to buy and play it again on modern hardware, here’s my tip: only do it if you have an enhanced console to play it on 60 fps. Other than that (and extending to PC users), don’t waste your money on this remaster. But if you never played Hot Pursuit before and like arcade racers, this is the one for you. Get ready for some of the most intense races and police chases ever created on a videogame. You’ll be on the edge of your seat for hours and crave for more!