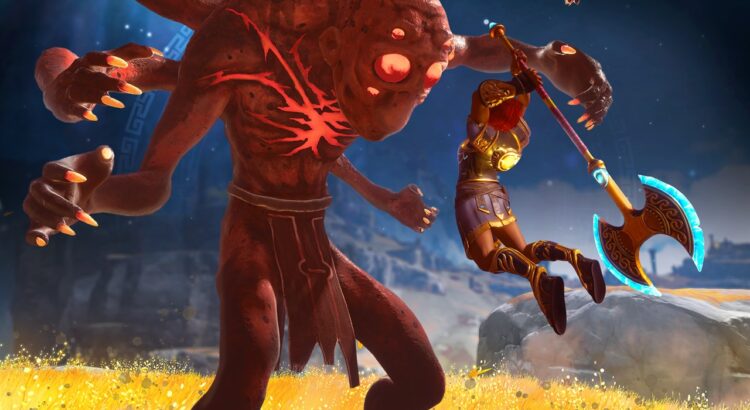 While I wouldn’t call any of Ubisoft’s adventures hard to get into, you could argue that they’re not at all concise. Strides were in fact hit with Assassin’s Creed Valhalla into making it less of a slog when compared to what came before it, but it’s still a huge and extremely busy game. So it’s nice to see them trying their hand at a more easy going experience; for as derivative as it feels at times, Immortals Fenyx Rising is a fun and most importantly, very uncompromised time.

Greek mythology has been done to death in games over the last few years, with even Ubisoft having their own go at it with 2018’s Assassin’s Creed Odyssey, but it’s perhaps Supergiant Game’s amazing Hades that opened up the way for alternative approaches to how to deal with gods and mortals. In the case of that game, the rich tapestry of myths and legends helped give way to one heck of a time trying to escape from hell without a good dose of humor every now and then.

Immortals Fenyx Rising isn’t nearly as good of a written game as Hades, not by a long shot, but it still manages to pack some charm as it borrows some of the more tragic elements of ancient Greek culture and at the same time a more light-hearted kid friendly humor. Zeus and Prometheus spin up a tale that’s turned into gameplay as you take up the mantle of Fenyx, a soldier and last survivor of a shipwreck who wakes up at the shore of a mysterious island filled with monsters, titans, and you guessed it, gods, doing what they do best — messing with mortals.

It would be easy to chalk up Immortals as a mere The Legend of Zelda clone and call it a day, especially Breath of the Wild, but outside of the climbing mechanic and the familiar combat, I feel that Fenyx Rising has a tad more going for it. If I were to make a direct comparison, I would stick it closer to the modern Assassin’s Creed, but in a much more simpler angle. In many ways, it’s way easier to get into thanks to just how much less there is to worry about.

For instance, leveling up is a matter of putting points into one of the three weapon classes and that’s it, you gain strength in any of the ones you pick up moving forward. Powers come in the form of new equipment you earn along the way, when you jump into Tartarus for a more extended combat and puzzle scenario. Stuff like Daedalus’ wings and the Axe of Atalanta are found very early on into your adventure, and along with the Bow of Odysseus are the base gear you’ll make use of for the entirety of Immortals.

Perhaps the game’s weakest aspects, but still relatively serviceable mind you, is its combat. I call it the least fun aspect of Fenyx Rising because it feels all too simple, with not much to it. Outside of being able to parry enemy attacks, it’s a very basic hack ‘n slash with only three attacks you can put to use: a normal sword swing, a heavier axe hit, and shooting up to six shots for your bow. It works for what Immortals tends to throw your way when it comes to combat scenarios, but I would’ve liked more challenge.

I can’t say I loved Genshin Impact, the free-to-play gacha that was released a couple months back, but I definitely appreciated how colorful it was and the decent get in/get out style of play that it provided. Fenyx Rising goes for pretty much the same approach, with a similar delivery of missions that’s really the norm for the usual character action game. It’s also definitely a gorgeous one too, but if it weren’t for the presentation it could just as easily have been a PlayStation 2 era game in the vein of Maximo vs Army of Zin, one of my favorites from that time.  That’s no knock against Ubisoft’s latest since it’s really what it seems to be eyeing in tone and overall gameplay.

I don’t want to sound all negative about Immortals: Fenyx Rising. First and foremost, it’s probably one of Ubisoft’s straight to the point and contained games in quite a while. It’s also very funny, with some pretty hilarious moments thanks to its writing, but none of that really brushes away the fact that it’s fairly behind when compared to the modern crop of character adventures we’ve got to see in the last few years. For all the similarities to The Legend of Zelda: Breath of the Wild Immortals Fenyx Rising might have going for it, it’s what it tries to do differently that sells it short, making it an extremely average game.