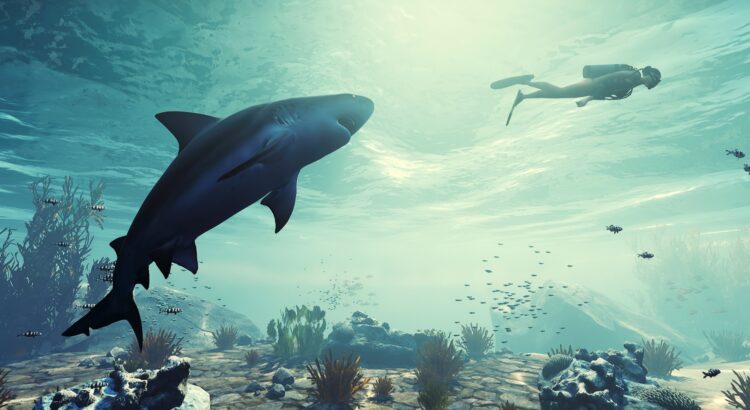 It had been a while since I’ve had such a stupid fun time playing a game as I had last year with Maneater. Tripwire Interactive’s open-world shark simulator is admittedly silly, but totally serviceable. Regardless of the issues I had, mostly tied to how cookie cutter progression ends up being, its uncompromised approach ended up winning me over completely. Now, it’s the Switch’s turn to get to eat a great deal of people and fellow sea creatures, this time while on the go.

Considering the already impressive work done to optimize Maneater to run on a vast variety of systems, I’m not particularly surprised with how well it performs on the Switch. Admittedly, some visual compromises had to be taken in order for it to work, such as the more limited draw distance and slightly simpler character models, but none of the cutbacks take away from the end product at all. In fact, if you’ve missed Maneater the first time around and don’t mind the Switch’s inherent controller problems, this is a perfectly fine version of the game to play.

Maneater, for those having only gotten word about it now, is a reverse take on Jaws, basically. You control a great white shark as it grows and matures into a giant widowmaker, terrorizing a coastal town into submission and ruining a whole bunch of annoying shark hunter’s lives in the process. All while, you’re being commentated by an over-the-top nature documentary voice over that’s positively hilarious.

There’s no way around the fact that Maneater holds no qualms about being absolutely ridiculous the whole way through, and it only amps it up the further you get into it. It starts out pretty tame, but it doesn’t take long before your shark persona starts growing hard bone shell or mutates into a being made of electricity and is able to zap your victims into submission. It’s all played up for absolute silliness, and works brilliantly.

We’ve gotten all manner of open-world games over the years, but Maneater takes the cake for being one of the craziest and overall best put together. It isn’t perfect by any means, but it does what it proposes extremely well. Having it portably on the Switch is something bonkers, and like Panic Button’s port of Doom, it’s another great example of the system’s potential to serve cut down, but still satisfying experiences in a way no other console can.