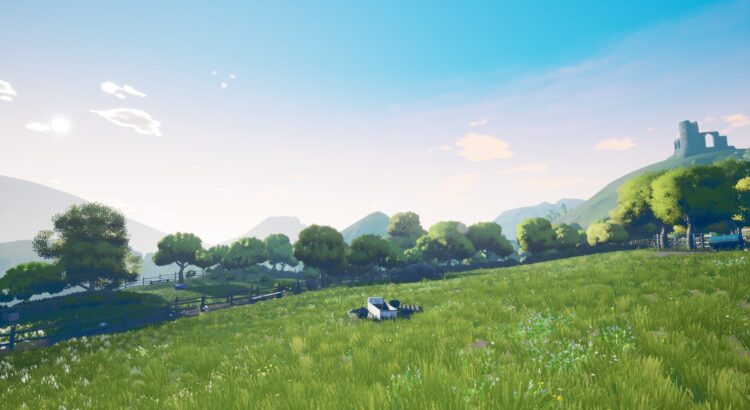 It was only during the various lockdowns of last year that I became a fan of the BBC comedy show, Detectorists. Starring Mackensie Crooks and Toby Jones as a duo of amateur metal detectorists, the show is an easy-going romp with plenty of funny jokes, low stakes and good times. The Magnificent Trufflepigs invokes the spirit of the series by attempting to capture both the tedium and the exhilaration of metal detecting in this short, story-driven experience. While the tale which the game unfurls is both emotional and personal, and touches on many different themes, I was unfortunately left feeling rather underwhelmed by its rushed ending.

Beth is a bright, energetic young adult who grew up in the English village of Stanning, who now has a job at her family’s outdoors and adventure retailer, Mudalot, the largest employer in the valley. She’s engaged to Jake, and everything in her life appears to be going great. But something is niggling at her. She wants to find the missing pair of an earring she found while metal detecting when she was a kid, and was rewarded £500 (plus her picture in the newspaper). To that end, she asks her old friend Adam to help her scan the fields of Stanning Farm, which is due to be torn down and replaced by a solar farm. You take on the role of Adam, and over the course of a week set out to map the fields, dig up some treasure, and reconnect with Beth.

The plot has a story to tell, and it’s not one that you can particularly control. Although the game has similarities to Campo Santo’s debut title Firewatch, it’s a lot more restrictive. Like Firewatch you never actually see Beth, although your character does have in-person conversations with her which you view from outside the car. There is very little exploration, as each day you’re confined to only a small zone of several fields. It also has less dialogue options, with Jake’s responses sometimes happening automatically, or being limited to purely binary choices.

Both Adam and Beth are performed superbly by Arthur Darvill and Luci Fish, with plenty of naturalistic banter between them which makes them feel like old friends. I wish the dialogue advanced at a natural pace though, as for some reason you have to click to advance each spoken line immediately, the default being to leave a short pause between them. The story is focussed on finding meaning in your life and thinking about what you really want to achieve, and to say more would spoil it. It’s certainly good, but the sudden ending felt undeserved and happened way too fast, while the last minute twist regarding Adam I thought was really quite hamfisted.

Gameplay consists of walking around the fields of Stanning Farm, scanning the ground with your metal detector, hoping to find something interesting. Every time you do, you’re usually rewarded with either a text conversation with Beth, or a voiced conversation over the radio. The sensitivity on the detector is thankfully quite high, so if you go to an area of the field you haven’t scanned yet, you’re fairly likely to find something pretty quickly. Although the game says it’s best to scan fields methodically, I found this was unnecessary because the walking speed while scanning is very slow, and it was much easier to scan momentarily, then jog a few feet forward before scanning again. All of the “treasures” you unearth will be familiar to many detectorists; bottle caps, nails, pieces of machinery, maybe very occasionally something actually worthwhile. Beth is keen to see pictures of all of them, which you snap with your mobile camera, before getting into a small text chat with her or talking over the radio about what you’ve found and Beth’s life. The metal-detecting element is fine, but it definitely takes a backseat when compared to the narrative. You don’t have infinite time to scan the fields and the story will advance when you find particularly important items.

Visually the game has a fantastic painterly aesthetic, highlighting the dry stone walls and overgrown fields of the farm, rustling in the wind. Considering the lead designer of this game previously worked on a personal favourite of mine, Everybody’s Gone to the Rapture by The Chinese Room, you can definitely see the lineage in the creation of a stunning environment. I particularly liked the sunsets each day, which cast long shadows across the fields. The musical score is fairly sombre and mournful, beautiful within the context of the game, but not something I’d wish to listen to separately. There’s certainly an atmosphere here, but not to the extent of something like Dear Esther.

Although it covers fairly deep emotional subject matter, The Magnificent Trufflepigs is generally an extremely relaxing, easy-going game with no fail states; a “walk-‘em-up” where you wander across several fields, digging up old bits of rubbish while reminiscing with an old friend. It’s a broadly entertaining couple of hours, but the narrative did not affect me emotionally in the same way Firewatch or Everybody’s Gone to the Rapture achieved. When coupled with the rushed and abrupt ending, The Magnificent Trufflepigs is a game which I felt never managed to reach the emotional depths I wanted it to.