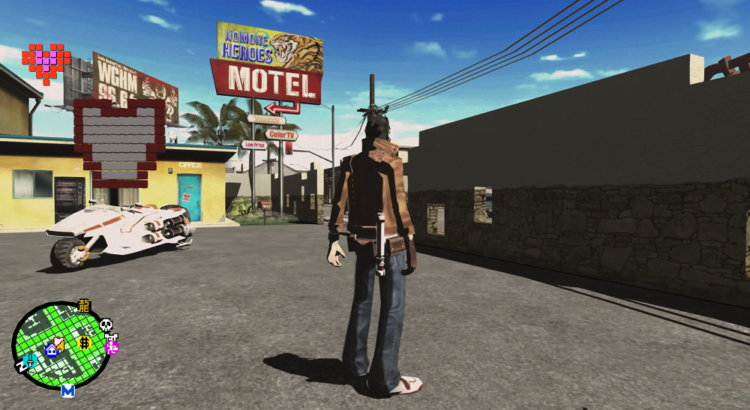 The brainchild of Goichi “SUDA51” Suda and his studio Grasshopper Manufacture, No More Heroes and its sequel No More Heroes 2: Desperate Struggle have long been seen as among the best games ever released for the Wii. Thoroughly adult in tone compared with most games on that platform, these titles have a significant cult following. Long mostly unavailable outside the Wii, they quite logically received a Switch port in 2020. More surprisingly, they have now been ported to the PC as well.

There are three key technical aspects to these releases. Firstly, these are fairly barebones HD ports of the original Wii versions, not remasters. Secondly, the games are controller-only – hardly a dealbreaker, as they would be extremely awkward with keyboard and mouse. Finally, for those who care about such things the games are locked to 60 FPS.

With those points of order out of the way, it’s worth recapping what No More Heroes actually is. Single-player only, the first game is a mixture of elements – something like three parts hack and slash, one part deliberately monotonous mini-games, and one-part open world. The game is set in the fictional generic California city of Santa Destroy and the player takes on the role of Travis Touchdown. He is, as others have observed, the stereotype of a dissolute gamer circa 2007: a diehard otaku, pop culture nerd, and socially awkward loner. Having bought an off-brand lightsaber and trained himself on martial arts videos and old wrestling moves, he has become an assassin with an all-consuming desire to become the undisputed best in the business.

This quest for killer-for-hire supremacy is the driving force behind the story of No More Heroes. To become the best, Travis must battle and defeat the ten assassins ranked above him (who all, conveniently, hang out in Santa Destroy). The shadowy United Assassins Association demands a hefty fee to set up each of these conflicts, and this splits the game into two broad types of play. The ranking missions themselves are all-out action in which Travis visits a location like a school, baseball stadium or film studio to take on hordes of lunatics before a climactic battle with the next-ranked assassin. The fighting system is relatively simple but satisfying, and translates well to a controller while the boss battles are thankfully varied in visuals and gameplay.

While defeating enemies and rivals earns Travis money, these actions are not lucrative enough to afford the ever-increasing battle fees. In the other type of gameplay, the player explores Santa Destroy on a motorbike so enormous that Judge Dredd would approve. Various side-missions and part-time jobs are available, such as collecting coconuts and picking up litter. These jobs are every bit as tiresome as they sound, but mercifully brief and well-paid. Exploring Santa Destroy can feel deeply hollow at first, as the bike controls are quite poor and the city is almost as bland and empty as the one in Mafia II. However, the odd rhythm of No More Heroes has a strange and unique pull all of its own. Gradually, more opportunities open up – clothes customisation, beam katana upgrades, new wrestling moves – and the game’s pervasive weirdness and charm becomes more appealing. The often crude graphics, dubious bike controls and bizarre dialogue become less like obstacles to enjoyment and more part of a uniquely idiosyncratic ride.

While not all of the game’s sheer oddness can be traced to a specific intent, SUDA51 clearly had satirical intentions here. The consciously boring side-jobs contrast strikingly with the engagingly bloody combat, reflecting gaming’s fascination with ultraviolence. The pop culture references come thick and fast, from a baseball bat-wielding gang that recalls The Warriors to Dr. Peace, an early boss based on a maudlin, singing Charles Bronson. While No More Heroes can often feel overly rigid and repetitive, these kinds of curveballs help keep the experience fresh and increase the odds that players will see Travis’ quest through to the end despite the arduousness of some aspects of gameplay.

Travis Touchdown returned in No More Heroes 2: Desperate Struggle. Both released and set three years after the original game, the sequel effectively re-starts our dubious hero’s quest to hit the top of the assassin rankings. While the combat system remained mostly intact, SUDA51 implemented a number of other significant changes to gameplay. Most notably, the lacklustre open world environment and tiresome side-jobs were both dropped altogether and replaced by a simpler map with selectable locations and a series of retro minigames, respectively.

The combat is broadly similar to the original, albeit possibly a little more slick and with some added moves and in some cases, even more bizarre and outlandish bosses. Anyone who enjoys the original will certainly find a lot to like in No More Heroes 2, but there is a strange paradox at work. Where the first game felt bloated, the second feels strangely truncated. As dull as the open world was, its omission leaves a strange gap, and the reliance on ersatz 8-bit minigames can feel mildly lazy. You can turn into a beautiful tiger though, so there is that.

The No More Heroes games are a strange, wild ride. They may be repetitive, and potentially wearying if played back to back, but SUDA51’s unique take on the hack-and-slash genre is a frequently intriguing one. The limitations of these PC ports are clear, but hardly a dealbreaker for anyone who is intrigued by the games but missed them the first time around.