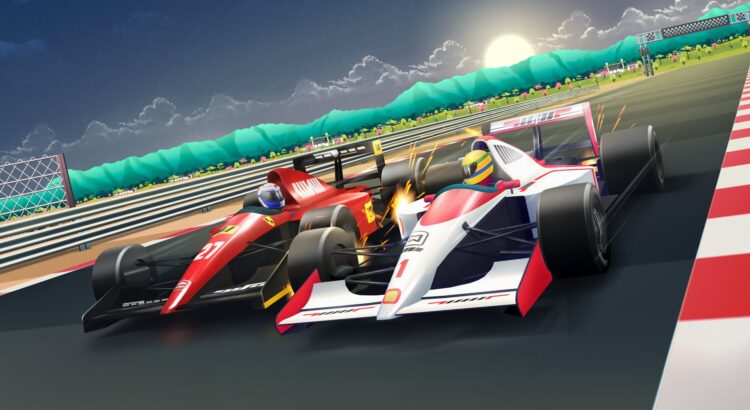 The name Senna is iconic in many ways. As a racer, Ayrton Senna is legendary, and although drivers like Lewis Hamilton and Michael Schumacher have long beaten his records in wins and tournaments, that hasn’t taken away the mystique.

But perhaps it’s his tale of resilience and sheer talent that resonates the loudest, given that Senna was one of the most successful sportsmen in all of Brazil, not just in his field of work. He also served as an inspiration for adults and children who, like myself, tuned in every weekend to watch his exploits on TV.

I still remember that dreadful day in May, 1994 when he tragically died while racing in Imola, San Marino. It’s been decades since then and that memory has stuck with me because it not only marked the moment I lost one of my childhood heroes, but my overall interest in keeping track of F1. Racing, really, has never been the same to me since.

That makes it tough for me to get into homages like Horizon Chase Turbo‘s Senna Forever DLC. Previously, I enjoyed Gran Turismo 6‘s own take on Senna but ended up falling off after a few days of playing, so I tentatively hoped Aquiris Game Studios‘ arcade racer would better suit my tastes and keep me interested for just long enough.

And that it did! I had already enjoyed the core content in Horizon Chase Turbo enough to not only review it for the site, but also buy it on two other platforms, including my phone, which to all intents and purposes, is hardly used for anything but WhatsApp. That’s how good that game is, and this DLC only elevates it further. Could that merely be a merit of nostalgia on my part? Perhaps, but it’s also an amazing historical record done in game form, and a fun one at that.

Senna Forever is presented as a separate campaign, one that can be played regardless of your unlocked progression in the main game. In it, you go through five different stages of Senna’s career, from his humble beginning with a severely underpowered car under Toleman to his glorious run with McLaren, and the abrupt end while driving for team Williams.

Each of these is split into a number of individual races, each packed with a series of challenges you can complete, like running a lap without picking up fuel, for instance. They’re fun to tick off from the list and help inject a lot of welcome tension to the 2-to-3-minute long races, making them not a whole lot of trouble to restart in case you fail or want to go for a perfect run.

Senna was also known as a brilliant tactician, and that aspect of his persona is also a part of the Senna Forever in the form of three choices you can make before races in regards to how you want your car to be set up. Each serves a special purpose and provides a set of pros and cons and come in handy in their own unique way depending on the race you’re about to partake in, as well as your skill in driving and whether or not you’re looking to take risks. Having better control during turns whilst being slower might be the safest route, but damn it if I’m not a speed demon with a lot less fuel!

Split among every few races is a little fact about Senna’s career up to that point, such as his terrific 1985 race in Portugal, where he not only landed a pole position, but also the best track time along with the win. It’s these small touches that show off the passion of Aquiris Game Studio, as a Brazilian development team who were obviously influenced by Senna’s legacy. That, coupled with all the visual flourishes that include all-new car models that emulate the look of the many different ones that Ayrton Senna drove, including the many liveries not only for his rides, but also his opponents, which were many over the years.

Horizon Chase Turbo was already a very good racing game in its own right, and now Senna Forever only cements it as one of the best modern takes on arcade racing with an incredibly caring and well put together tribute to one the greatest names in racing and sports in general. And hopefully this won’t be the last we see of Horizon Chase Turbo, but in case it is, what an amazing way to close it all off.