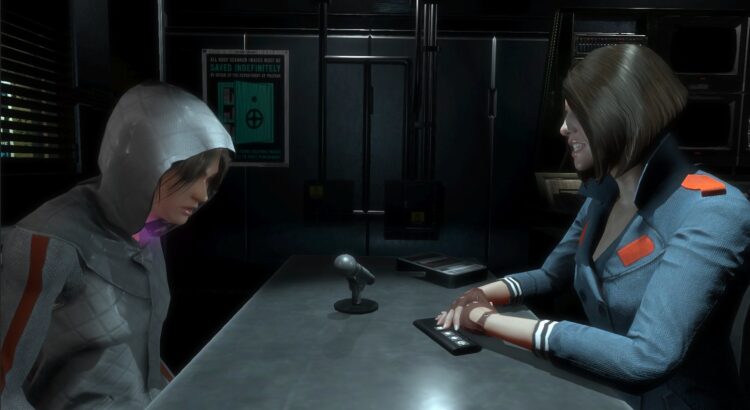 République is now a pretty old game. First released on iOS in 2013, it saw its original console release in 2016, while the Anniversary Edition release this year sees a slightly remastered version of the game come to Switch, PS4 and PSVR. it doesn’t alter the core gameplay, but bundles in the previous DLC into a combined package. It also includes some audio commentary from the developers, similar to what was added to Deus Ex: Human Revolution Director’s Cut. For fans of classic old-school stealth games République certainly scratches a similar Metal Gear Solid itch, but its rather confusing controls and frustrating camera system may hamper your enjoyment.

République is set in a totalitarian police state within a secret facility known as Metamorphosis, which is led by the Overseer, Treglazov. The game begins with Hope, the protagonist, contacting the player via her phone, asking them for help. Hope is a “Pre-Cal” who has been exposed to forbidden knowledge and is scheduled for Recalibration, which will either wipe her memory or kill her. Throughout the game you assist her with trying to escape the facility, exposing the secrets of what’s happening within, while engaging with other characters such as Mireille Prideaux (voiced by Jennifer Hale), a senior administrator of Metamorphosis, and Daniel Zager (voiced by David Hayter), a deceased revolutionary who attempted to fight back against the system. The plot and the world are fairly interesting and the mysteries of the world are slowly uncovered over the course of the game’s five chapters. The game is very deliberately inspired by George Orwell’s classic novel “Nineteen Eighty-Four”, both in terms of atmosphere and themes.

République is a third-person stealth game from a series of fixed-camera perspectives, as was the case in the original Resident Evil. You view the world through a variety of security cameras dotted around the facility, from which you can jump manually using Omni View, which pauses the world and allows you to select a variety of hackable devices. You also move Hope, which will dynamically switch camera to a new perspective when Hope moves out of range, most of the time. Depending on your difficulty you do have some weapons to take down guards although the focus is definitely on avoiding combat where possible. Pepper spray allows you to temporarily blind a guard in order to make a quick exit, while the taser is a more permanent solution to take them out. You can also find a variety of collectibles, including a host of real-world games on floppy disk (somehow), or cassette tapes from Zager. Enemy AI is pretty braindead, sticking to clearly defined paths and quickly losing interest in pursuing Hope if you’re able to remain hidden in a locker for long enough.

The main issue with the controls is the habit of the game to jump to a new security camera without warning when moving Hope, which can suddenly mean you’re moving in a different direction, or the guard who was in the middle of the screen is no longer visible. This can sometimes ruin stealth, as it means you’ll accidentally move Hope into view without meaning to, as your orientation changed. Likewise, the camera switching itself is inconsistent, as it seems to be triggered by Hope’s relative proximity to the camera, rather than her visibility to its viewpoint. Tank controls from a fixed perspective have always been a bit of an odd stylistic choice (or a necessity, in early years), and while it was clearly done here in order to harken back to the Metal Gear Solid era of stealth, I’m not sure it particularly adds to the gameplay, especially on console. Indeed, the frustrations with it, and never quite being confident with where Hope was in the environment meant I think I would have preferred to have played the game from behind the shoulder, Tom Clancy’s Splinter Cell style, which at least would be consistent.

Structurally the world is very segmented in a similar manner to Metal Gear Solid 1 and 2. You’ll sometimes be returning to old locations to explore more or access areas you weren’t able to previously, as your Omni View gets upgraded to be able to hack more complicated systems. There is a good variety of locations though as the Metamorphosis facility is pretty sprawling, including libraries, offices, beautiful wood-panelled halls and some futuristic laboratories as well. Graphically the game has aged quite well, especially some of the environmental details which help to build the world. I also enjoyed the voice cast, with the famous voices of Hale (inflecting a rather amusing French accent) and Hayter definitely adding a lot of gravitas to proceedings.

République is definitely a game which was deliberately designed as a throwback stealth title, and on those criteria, it certainly succeeded. That said however, the camera system is nonetheless frustrating, and while the stealth gameplay is solid, it does get rather repetitive as time goes by. The Anniversary Edition isn’t a graphical overhaul so it’s still the same visuals from 2016, but the story and world remain as interesting as they ever were. If you missed République the first time around on iOS or the second time on its original console release, and you’re a fan of old-school stealth games, this should certainly be a game you’ll enjoy. For more casual players, it will depend on your tolerance for struggling with the movement and camera system.