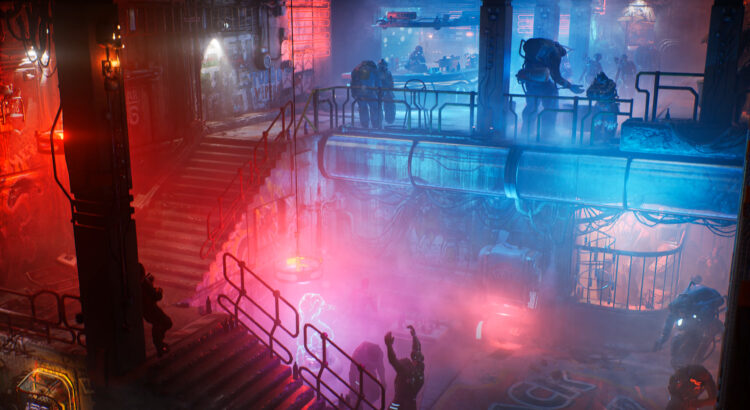 The cyberpunk genre owes a lot to films such as Blade Runner and classic gaming experiences such as Shadowrun, and no truer is this embodied than in the recent indie release The Ascent.

When The Ascent is at its best, you are running through the shadows, your body half illuminated by the garish red and pink dynamic neon lighting that permeates much of the interior of Veles, your chosen firearm in one hand, empty ammo clips bouncing off the rain soaked pavement, bullets tearing through all manner of thugs and feral creatures as if they’re just sacks of organs to be torn apart mercilessly. You then whip around an instant later, a cyberdeck in your other hand as you quickly hack a nearby vending machine which spits out health packs that you gather up greedily, before coming back around, quickly pulling out your rocket launcher and firing one off at the nearest thug, who promptly explodes, completely soaking you in blood and entrails.

“Damn,” you mutter under your breath. “I really liked this jacket…”

Yet perhaps as a nod to its lofty title, from here there’s nowhere to go but down.

You begin the game on the neon drenched planet of Veles as an “indent” (indentured servant?) whose life is under contract to a megacorporation. After a relatively short character creation process, you are tasked with repairing Cluster 13’s Waste Management System, lovingly referred to as “The Deepstink” by the residents. From there, you’re asked to provide security for a clandestine meeting, investigate a few other matters and hack into a terminal or two before your life contract is acquired by a new megacorporation who, unsurprisingly, has a variety of tasks for you to perform, implying that at the end of your usefulness, you may be freed from your contract entirely.

The individual parts that make up The Ascent can be interesting, even fascinating on their own, but when viewed in the context of the larger game or the bigger world itself, they each feel underwhelming at best. For example, the narrative surrounding the fact that every citizen on Veles is chained to a life contract to some huge faceless megacorporation is interesting, in theory, but not much is done with the element, besides using it to drive the fact that your character is completing one tedious mission after another. You do visit the Pinnacle, a high security tower where the ultra rich live in luxury above the clouds, presumably free of these messy life contracts but no mention is made of this while you’re there.

Ironically, since the game is so fond of throwing hordes of enemies at you, if you’re diligent about selling all the loot you’ll likely never use (and even if you’re not), you’ll be swimming in more than enough ucredits to pay off your life contract well before the main story comes to a close. There’s nowhere in the game you can actually do this, though it might have been an interesting inclusion.

Narratively, while being a silent protagonist may have done wonders for the career of Charlie Chaplin, for your own shadowrunner, it serves as more of a detriment than anything else. Other characters don’t so much as talk to you or with you than talk at you. Your character doesn’t seem to have much to say about much of anything really. Oh, you can ask about mission objectives and offer an odd quip here and there but for the most part your character isn’t the talkative type. It also doesn’t help that the majority of characters you see walking around on Veles aren’t interactable. It all ends up making the game’s shiny surface feel hollow underneath.

Your quest givers, from the unpleasant boss you start out working for, to the ones that come after, aren’t terribly likable at all and seem to have few redeeming qualities; they’re mostly just there to use you as a means to an end, whether it’s to fetch an item, or take out some nasty thug, or control the galaxy.

You’ll find and upgrade weapons, level up and allocate skill points and slot augmentations til your character’s face looks like a pincushion; it’s all standard fare really. Weapons and armor have several different damage types and resistances and skill point categories are mostly self explanatory (though you can avoid several skills entirely without any sort of detriment to your character at all). For example, the “tactical charge” skill is described as decreasing the charging time of the item in your grenade slot based on the damage you deal, but in practice this timer rarely seemed to charge any faster, no matter how many points we dumped into it. The aiming skill carries the ambiguous description of, “increases weapon spread recovery rate,” and dumping skill points in here didn’t seem to affect our character at all.

Online play is, thankfully, lag free, once you find other indents to play with. With no drop in or public matchmaking, the only way to share an adventure is to invite a friend who also has the game. It seems like loot is a free-for-all though, even ultra rare items like extra skill points and high level weapon upgrade components.

Combat in the game is generally fast paced, thanks to the game’s proclivity to send waves of nameless street thugs, feral mutants and killer robots after you constantly when out wandering around the world. The difficulty spikes when facing bosses means you’ll probably have to fight them several times. Movement is handled via the left stick, while you can aim in any direction using the right stick, while the right trigger fires and the triangle and square buttons handle weapon swapping and reloading, respectively. It’s a system that does take a bit of getting used too, admittedly, but soon becomes second nature. Activating your augmented abilities is done using the top right and left buttons and tossing out your equipped grenade slot item is done by pressing the left stick in (though this tended to go off accidentally while simply moving around, and there isn’t any way to remap or reconfigure the controls that we could find).

While the seemingly endless hordes of enemies in the game may test your patience, (and even more so your trigger finger), it’s the main story quest line sequence ending boss fights that will really push your buttons. From giant armored mechs to huge mechanical spiders equipped with room incinerating flamethrowers to timed events where you have to simply survive in a large chamber for two minutes against an actual endless wave of constantly respawning enemies, you’ll find your stress levels (and blood pressure) rising in frustration.

The world of Veles is a grim one, indeed.  Beneath its multi-hued, rain slicked surface lies a world run by the corporate and served by the desperate. The small settlements that fill in for towns are filled with light, as if to hold back the encroaching darkness, the murky landscape that threatens to swallow them whole at any moment. It is Blade Runner without the soul. It is Shadowrun without the depth.  In the end, perhaps a more fitting name for the game would have been “The Descent.”