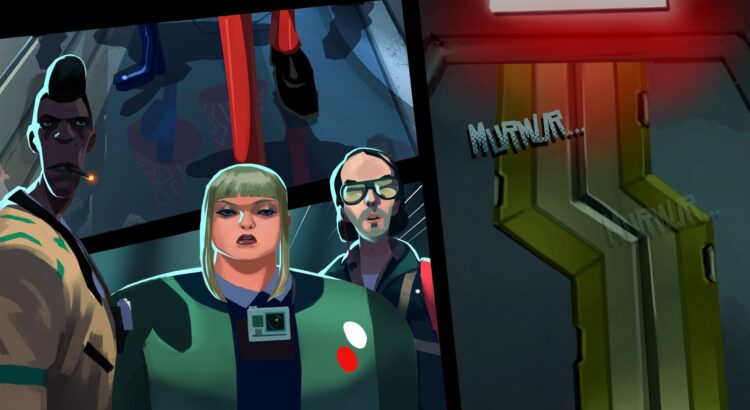 In recent years, point-and-click adventure games have bounced back after their long period of decline following the turn of the millennium. Developed by Canadian-based BKOM Studios, Sunday Gold may sound like a new cigarette brand but is actually an unusual effort to expand the appeal of this historic genre. Set in a bleak London in 2070, it fuses point-and-click adventuring with turn-based, tactical battles. This combination produces some awkward flaws, but also a genuinely novel and involving experience.

The brief prologue, made available free ahead of release, introduces playable character Frank. A cool London criminal with gravity-defying hair, he has seen a recent job go wrong and now owes money to some unpleasant people. An effort to sneak into Frank’s local boozer, the Jolly Hangman, introduces the mechanics of Sunday Gold – a mix of predictable and more unusual concepts.

Predictably, Frank can be directed to interact with any number of objects in the environment, in this case a dingy back alley. Unusually, play is turn-based and these interactions draw on a limited pool of seven action points. These are replenished only when a player ends their turn, which at any point after the prologue risks increasing an alert level. When a heavy-set debt collector bars Frank’s way, it prompts an introduction to the game’s turn-based combat, which also draws on that same AP pool. Quite quickly, then, Sunday Gold marks itself out as an adventure with big differences to the norm.

Frank soon teams up with the other two playable characters. Sally is a two-fisted criminal and activist who picked up some rudimentary medical skills working in a dog shelter, and Gavin is a nervy, disgruntled hacker and security expert. These characters are one of the biggest strengths of Sunday Gold. They may not change a great deal over the course of the story, but they are well written and superbly voice-acted.

Frank and Sally worked together on the proverbial job gone bad, but what unites them with Gavin is a shared desire to take down Kenny Hogan, loathsome billionaire maniac and owner of megacorporation Hogan Industries. This villain is heavily invested in dystopian London’s new favourite pastime: King’s League is a series of brutal races involving reanimated and cybernetically enhanced dogs. Hogan owns the reigning champion, a particularly vicious specimen which turns out to be called, yes, Sunday Gold.

The efforts of Frank, Sally, and Gavin to expose the other horrors Hogan is responsible for is the basis for the structure of Sunday Gold. The game has three chapters set in an office building, a covert lab, and a lavish mansion respectively. BKOM have crafted a unique world here, with visuals that draw on comics and Disco Elysium and dialogue inspired by a half-dozen Guy Ritchie movies. It’s a grim, lived-in future in which the bloodsport of King’s League reflects a ruthless, dog-eat-dog society in which life is cheap.

Gameplay alternates between solving puzzles to uncover Hogan Industries secrets, and fighting off groups of enemies. Happily, the puzzles here are much fairer and more logical than the adventure games of old. BKOM hasn’t packed these largely static but lushly painted environments with red herrings; solutions just require some lateral thinking, and offer some satisfying eureka moments. The best puzzle gives the heroic trio just 22 action points to escape an incinerator before it activates; even the worst ones are always solvable with minimal frustration. Each character has a specific unique skill which plays out in a minigame – for example, Gavin’s hacking resembles a numeric equivalent of Wordle. These are mildly entertaining, but become monotonous at times when they have to be done repeatedly.

The turn-based combat is fun, if unspectacular. That Sunday Gold was made on a modest budget is reflected in the handful of combat arenas and limited range of animation. Each playable character has their own skill tree, and so can be customised within certain bounds. Sally, for example, is the team’s healer. Trying to use her to supplant Frank’s status as the main damage dealer is a road to nowhere; the characters just aren’t designed that way. For his part, Gavin becomes a specialist in taking out cyborg and robotic enemies and his “overload” skill becomes critical in this role.

The real weaknesses of Sunday Gold are found in the seams where its point-and-click and turn-based combat segments are joined together – specifically, in the alert system. In theory, players will spend their AP cautiously for fear of raising the alert level and triggering a combat encounter. In practice, players will need to explore thoroughly and this will frequently make combat inevitable. It also doesn’t make sense that having, say, opened a lot of drawers will attract attention, or that enemies teleport in apparently from nowhere. In the late game, the team is so strong that many encounters feel more like a chore than a challenge – especially because once the trio has hit the level cap, fights no longer offer XP rewards. A “composure” mechanic suffers a similar fate; Frank and friends are easily debilitated by grisly sights early on, but the ready availability of composure-boosting skills and items largely short-circuits this whole concept closer to the finale.

Sunday Gold represents a bold effort to teach the old dog of point-and-click adventure games some new tricks. While there are some flaws and frustrations, BKOM Studios’ experiment has been broadly successful and players who would never normally touch an adventure game may well enjoy this one. In any case, Frank, Sally, and Gavin are likeable new characters who hopefully will get to humble the rich and powerful once again.