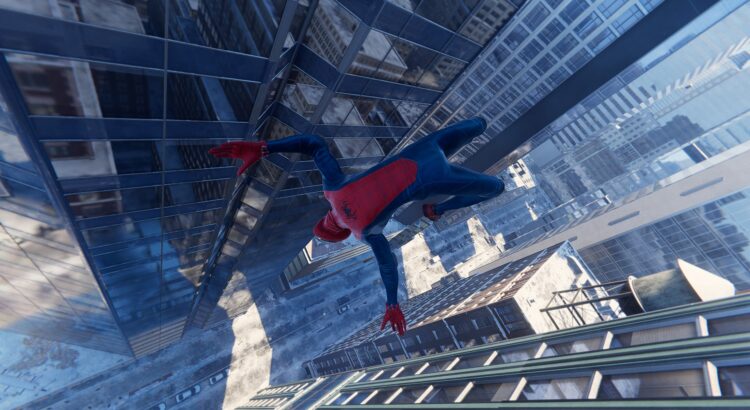 One of the best trends of the last few years has been seeing formerly console exclusive games make their way to PC. From Persona 4 and 5, to Days Gone and God of War (2018), what once were tentpole exclusives are now also available for PC players to enjoy. PlayStation especially have been making inroads in this area, acquiring PC porting studio Nixxes, who previously did the PC versions of games such as Deus Ex: Human Revolution and Tomb Raider (2013).

This year, we’ve seen the Insomniac Games Spider-Man (2018) arriving back in August, and now we have Spider-Man: Miles Morales, the 2020 expandalone sequel. M’colleague Eduardo reviewed the original release of Miles Morales back when it launched on consoles, so I’m taking a look at the new PC release.

Miles Morales is set shortly after the events of the 2018 game and its DLC The City that Never Sleeps, although if you haven’t played that game, you won’t be missing out on a massive amount of story. All you need to know is that Miles was bitten by a genetically modified spider in the previous game, in a very similar manner to the original Spider-Man, Peter Parker. In this game, Peter is away on holiday, leaving his protege Miles as “the new Spider-Man” to protect New York while he’s away.

Inevitably, trouble finds Miles fast, drawn into a web of intrigue involving the Roxxon Energy Corporation and it’s CEO Simon Krieger, a terrorist group called Underground, and his school friend Phin Mason. Miles is also dealing with his newly discovered bio-electrical powers, which have given him an edge against his opponents. The story and characters are nicely developed and the cutscenes are all fun and enjoyable, as they were in the previous game.

Miles is a great lead character and it’s fun to see his continued growth, following on from his appearance as a side character in the 2018 game. In part thanks to the film Spider-Man: Into the Spider-Verse, Miles feels like almost the more interesting version of Spider-Man these days compared to classic Peter Parker, and the universe Insomniac are building (and plan to continue in next year’s Spider-Man 2) is excellently crafted.

Gameplay consists of several core elements returning from the first game; web-swinging around New York, fighting enemies hand-to-hand, and stealthily taking out bad guys. The latter two elements are heavily inspired by the Batman: Arkham Asylum series, although in both Spider-Man (2018) and Miles Morales, the Spider-Men have a lot more tools and special moves at their disposal compared to Batman.

The web-swinging is easily the most satisfying and brilliant part of the game; swooping down the streets and over the rooftops of Manhattan never gets old, even as Miles flails around due to his comparative unfamiliarity with being Spider-Man. The controls for this also transfer well to keyboard and mouse, with the exception of doing tricks while swinging (which by default is bound to the T key, making it impossible to hold the mouse, press T and press WASD at once). Keys can be rebound though to fix this issue.

The combat is slick and satisfying, mostly involving punching enemies, throwing items at them with your webs, or disarming and launching them into the air. There isn’t a counter system in the same manner as Arkham Asylum, but Miles can dodge and then follow-up with a move which acts as a counter, as well as deploy a variety of gadgets which assist in distracting enemies. Miles can also regularly power-up his electrical attack, very useful for stunning groups of enemies in one go.

In addition there are also sections where you can stealthily hunt and quietly subdue foes, very similar to the predator sections in the Arkham games. These are a nice change of pace and it’s always satisfying to clear a room of enemies via distractions, then immobilizing people in webs hanging from roof girders.

The PC version graphically looks amazing and can utilize both DLSS or FSR depending on your graphics card. The photo mode is excellent for capturing myriad images of Miles web-swinging through Central Park or Times Square, and the city is blanketed in snow, meaning that even though the map is ostensibly the same one that was in the 2018 game, it feels remarkably different. It also runs very smoothly and has been well optimized by Nixxes, an essential for keeping momentum when swinging around New York.

Much like Spider-Man (2018)’s excellent launch on PC back in August, Miles Morales is another fantastic PC version of a previous PlayStation exclusive. Next year we’re anticipating The Last of Us Part 1 (the remake version) will make its way to PC and likely God of War Ragnarök at some point, but I also hope we see some older PlayStation titles such as the earlier Uncharted games. I just hope the gap of time between the release of Spider-Man 2 planned on console and its PC version is not as long as the four years between the original game and its PC release.