Andrzej Sapowski’s The Witcher world has more than claimed its stake in the world of videogames. And for as bitter as he might be about how things have gone in terms of profit sharing between him and developer CD Projekt Red, he can’t deny that the games that have sprung out of his book series have carried Geralt’s fine name well beyond the borders of Poland, to international acclaim and praise. So it makes sense that the story must go on, even if our dear monster slayer’s saw its end when The Wicher 3: Wild Hunt closed off. Out of that game sprung the hugely successful free-to-play card battler Gwent, and now as a spin-off to that, comes Thronebreaker: The Witcher Tales, an adventure game that uses Gwent and twists it in brilliant ways.

I had the chance to check out the game a few weeks before release, and since then, I’ve gotten access to the entirety of its content. My first impressions of Thronebreaker proved very positive, and after further playing it, now in its complete form, I can’t emphasize enough how much fun it is, especially for someone like me who is really terrible at Gwent. Thronebreaker takes that game’s formula and applies it to single player, but instead of simply having all confrontations be dealt with via straightforward card games, you’re instead challenged to think outside the box, thanks to some clever puzzle and encounter design.

One fight, for instance, has you facing against one of The Witcher’s classic monsters, a Necrophage, but instead of simply outright kill it by using attack cards until it’s dead, you have to make do with the weak units that you are given and do just the right amount of damage to its surrounding cronies in order to get them to self-destruct and take out their master. Twists like this help keep the game fresh, and thanks to a well established pacing to progression, there’s no overwhelming sense of having too many options at your disposal; you learn to make use of what you have and are slowly introduced to new gimmicks every so often.

What makes Thronebreaker extra special is that it’s a strong package story-wise as well. Meve proves to be an excellent protagonist, as the queen of Rivia and Lyria just returning from far away only to find her kingdom in a tussle with the sneaky Nifgaardians thanks to the ineffective ruling of her son in her absence, her personality makes for some entertaining exchanges. And the role-playing decisions you make along the way help cement the sort of ruler she is, with the natural consequences of being too harsh, too lenient, or worse, exceedingly middle-of-the-road. There are no correct paths to take, and as the game clearly states after just about every decision, you almost always pick one of two evils. The supporting cast is also great, thanks to the usual fantastic writing that backs The Witcher franchise. Meve’s advisers start out as a little stuffy, as it’s to be expected from nobility, but they manage to grow into their own as you learn their backstories and have exchanges with them while on the road. 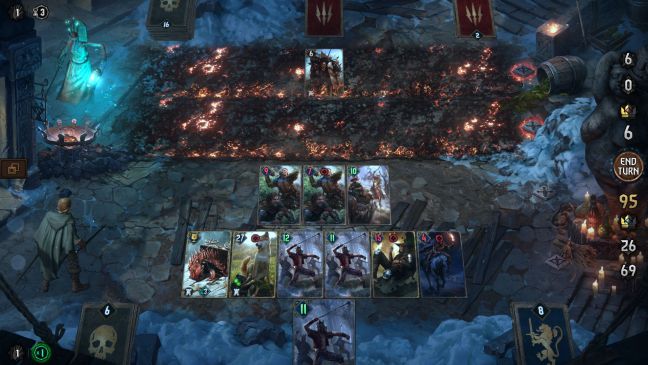 In fact, Thronebreaker spends a lot of time having you roaming the roads of Lyria as the plot unfolds, the queen leading her army across the land in order to save it from invasion and other threats. Side content is plentiful and surprisingly rewarding. Aside from the puzzle scenarios that I touched upon before, there are straight up fights that happen to be completely optional, but prove to be well worth undertaking thanks to the cards and items that they give you. Since Thronebreaker revolves around building up Meve’s base in order to recruit more units to her cause, keeping an eye at your item reserves and taking up a quest or three as you play through the story is vital. The main campaign missions tend to put you in somewhat demanding situations that usually have you be outnumbered or up against ridiculously overpowered enemy cards, but there’s always a way out if you can figure it out, and both like and unlike most card games, that’s usually a matter of being mindful of the decks that you can make with what you already have, while not demanding that you grind resources like crazy (*cough* Hearthstone *cough*). Thanks to this, losing matches doesn’t get tiring, but incentivize you to think differently and take an alternative approach.

There are also benefits to playing this content if you’re already a Gwent player, or plan to become one eventually. Treasure chests are hidden all around the beautifully rendered map of the game, and along with specific story rewards, they give you cards that you can put to use in multiplayer, as well as other trinkets like avatars and borders for the Gwent game proper. That integration is pretty smart since that spin-off is leaving beta alongside the release of Thronebreaker today. Gwent itself is a really cool card game that I hope to put more time in now that it’s finally hit gold, and like Thronebreaker, it’s also a treat to look at and listen to, thanks the strong production values that CD Projekt Red puts into it. 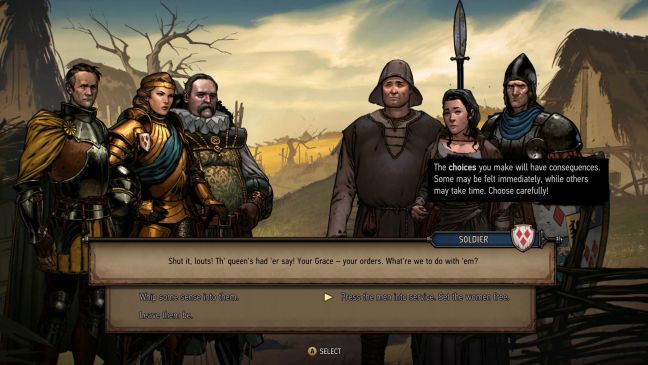 It’s not surprising to see such an emphasis in building a strong microtransaction backed free-to-play model, especially so after the tremendous success TCGs have been seeing since the days of digital Magic: The Gathering. Gwent has a lot going for it, and if Thronebreaker is any indication, there’s also room for some incredible paid side projects, something that CDPR is being very smart about, carving their own niche by giving players like me who prefer a meaty single player experience something to enjoy and get us to think about maybe partaking in the main course.

Regardless of your feelings towards multiplayer card games, there’s enough variety in Thronebreaker to keep you busy for quite a while. And you might just happen to change your mind about joining in on fellow humans and throwing down some virtual cards head-to-head, thanks to the wonderful way it drops in knowledge about Gwent. Heck, for the story alone Thronebreaker is more than worth checking out — there’s even a difficulty option for enjoying just that and not having to deal with fights much if at all — that learning how to decently play their card game is a bonus in my book.

Thronebreaker: The Witcher Tales comes out today for PC, alongside the final release of Gwent. It’ll be out December 4th on PlayStation 4 and Xbox One.

"For as by the numbers it might be in terms of quest design, Peril on Gorgon is a worthwhile trek if not for the writing alone." #TheOuterWorlds #PerilOnGorgon #DLC #PC #review @Obsidian @PrivateDivision
https://entertainium.co/2020/09/14/the-outer-worlds-peril-on-gorgon-review/

"Flight Simulator is an incredible achievement and a great pickup for anyone looking for a long term PC game to enjoy." #FlightSimulator #PC #review @AsoboStudio @XboxGamePassPC https://entertainium.co/2020/09/11/flight-simulator-review/