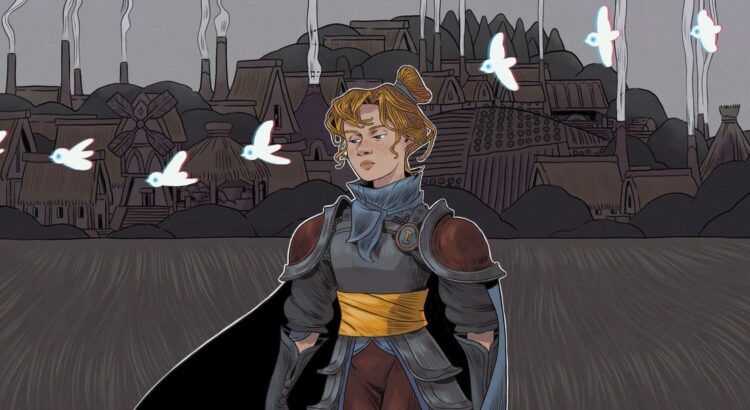 I think I should stop commenting on the state of the year generally in my Game of the Year round-ups because the last few years have shown that basically, the general trend seems to be “everything will keep getting worse”. At least 2021 was essentially “more of the same” in that regard, although for video games it was an especially turbulent and upsetting year, with the reveal of widespread abuse taking place at a myriad of major game studios and publishers, such as Activision-Blizzard. Games, as a business, have serious structural problems which need addressing, and fast. Despite this, the range and quality of games which got released this year was as strong as ever, if not stronger than 2020. Here’s a look at my personal top favourites.

Gareth’s Game of the Year
Best Time Loop Game
Loop Hero
It’s so rare these days to find a game which I can describe as truly unique. Loop Hero is definitely worthy of that description. Its merger of several different styles, being part idle game, part card builder, part Roguelike, only really hints at how different it is. Overall it’s best played in short bursts over a variety of sessions rather than in long periods, because the gameplay “loop” can get quite repetitive after a while, but that is rather deliberate. Every loop with your character helps to build your resources, even marginally. Every loop is different from the last, with a different layout or different equipment for your character. Every loop has you face new monsters or challenges. The pixel art is excellent, and the music is extremely catchy. Overall Loop Hero is a marvellously rewarding game and also the best time loop game of 2021 (a surprisingly competitive category this year). Read our Review.

Best Writing
Best Setting
Disco Elysium: The Final Cut
While Disco Elysium was originally released in 2019, the “Director’s Cut” version, which added full voice acting to the game, was released this year. Disco Elysium has already received huge praise for its writing, which I fully endorse. The writing is endlessly brilliant, the correct amount of witty, self-referential, and yet serious and emotional. It manages to weave deep political themes into the story from the outset, and gives you an enormous amount of freedom to play the character of disgraced police detective Harry Du Bois however you like, from a racist bigot to a paragon of virtue. It also has one of the most detailed and “realistic” settings ever created in a video game, with a deeply complex history and society which formed over hundreds of years. The city of Revachol feels like a real place, with its own culture and style. I’m still nowhere close to finishing Disco Elysium, but it is unparalleled in its ability to create a believable place populated with interesting characters.

Best Shooter
Deathloop
Deathloop is such an anomaly for me. It’s a game I like, indeed I like it a great deal. But unlike previous Arkane games like Dishonored 2 (and 1) I don’t love it. I suppose it ranks alongside Prey in that regard, although I think I’d actually put Prey above it. Deathloop’s core gameplay is extremely satisfying, and its integration of the time loop concept works really well as a method of slowly improving your character. But something was lacking in the game for me. Perhaps the lack of non-lethal options (as a veteran of immersive sims I kind of view this as semi-mandatory), perhaps how the lore of the world is deliberately kept vague (the prevailing theory is that Deathloop takes place in the future of the Dishonored universe, although this is yet to be officially confirmed). For whatever reason, after I finished Dishonored I didn’t feel compelled to dive back into it in the way I have before. Nonetheless, on its own merits it’s a fun and satisfying game to play with some excellent voice acting. Read our Review.

2021’s Old Game I Couldn’t Stop Playing
Fallout 76
I knew it would happen eventually, but I finally gave in to my worst instincts as played Fallout 76 in 2021. I’d deliberately avoided the game since release in 2018 as the game was infamous for being a broken and buggy mess, lacking in content. Three years later, Fallout 76 is now a surprisingly decent game, if you accept certain caveats. Most majorly, this is basically “Fallout 4, but bigger.” The map of Appalachia is about four times as large as Fallout 4, containing a wide variety of locations to explore and dungeons to visit. The gameplay is also more Fallout 4, with shooting essentially identical to that game. But as this is an online experience, you have to accept certain limitations. Your character’s weight limit is pretty limited, especially if you want to hold more than a few guns. Your stash weight limit is also restricted, meaning you can’t endlessly horde everything you pick up. You’ll also fairly regularly run into enemies who are over-levelled for you, which can result in immediate death. Quests which include NPCs are decent enough, but nothing as memorable as the previous games. Fallout 76 is another Skinner box loot-shooter, but thanks to its interesting world, it avoids getting stale too quickly. Read our Review.