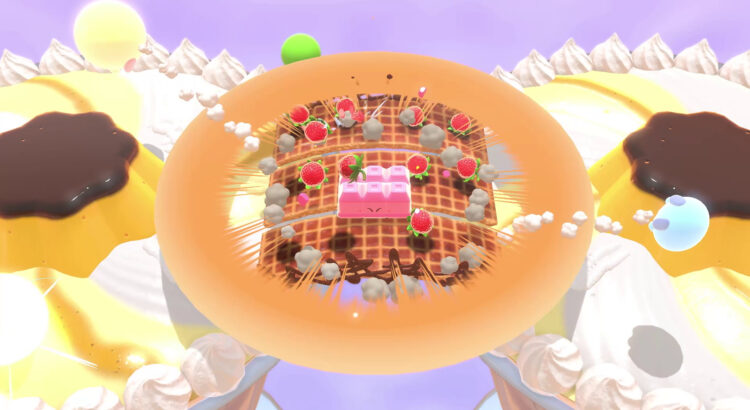 Kirby’s Dream Buffet is a four-player party game where you compete to eat the most strawberries over the course of four phases: a race, a minigame, a second race, and a battle royale. Whoever has the most strawberries eaten by the end of the game wins. Games generally last only a few minutes at most, each phase being quick and breezy. It makes Kirby’s Dream Buffet pretty apt for short-time play.

The races are set on long, winding courses where you want to try and collect as many berries as possible while also trying to be the first to the finish line. Copy-abilities, which are obtained from boxes positioned at certain points along the track and are food-themed instead of taken from enemies, can be used to give yourself a much needed speed boost (and stun other players briefly if you run into them) or make it easier to bust through roadblocks or bypass them entirely even. At the end of each course, there are three mountains of strawberries with different values: 50, 20, and 10. The player who eats the one worth 50 is almost always given a significant lead that persists through most of the game. It hardly guarantees a win, but it is indisputably a huge boon.

Minigames always see you trying to collect strawberries that either fall from the sky or spawn in specific locations at regular intervals in the 20 seconds the minigame lasts. The main thing that changes between them is the playfield. One sees you trying to jump into teacups to grab berries (and hope you don’t bounce right out again or are pushed aside), for example, while another sees you rolling around the tops of cupcakes, the frosting of some cakes slowing you down as you move through them. More unlock as you level up, but so far they seem to just be small changes in environment. I’ve only gotten a couple of the many that are locked behind level progression (think Tetris 99) and haven’t felt any particularly noteworthy differences. But as they’re slight, 20 second intermissions, the lack of variety isn’t terribly surprising.

The battle royale finale sees all four players trying to knock each other off the field to steal strawberries from one another. Copy-abilities spawn regularly, these ones focused more on attacking other players, which leads to chaos aplenty. Trying to steer Kirby around quickly enough to try and score a hit on your opponents is no easy task. Berries are regularly being dropped onto the field and a disembodied hand frequently appears to try grabbing Kirby with a pair of tongs, turning every second into a constant scramble as everyone tries to grab more and more berries to make up for losses or further secure their lead while also trying to avoid taking hits as copy-abilities become increasingly active. Better still, certain sections of the stage are removed over time, shrinking the already small arenas into tighter quarters. It’s a fun way to cap off each game as the wild energy it creates is fun and always a laugh.

At the end of the game, everyone is awarded additional berries (40 apiece for each bonus obtained) before announcing the winner. These bonuses cover actions like, who used the most copy-abilities, who ate the most berries during the race or minigame phases, and so on. It’s sort of Mario Party-esque – both in the kinds of criteria used and in how the endgame bonuses can be the deciding factor in who wins. Just collecting a lot of strawberries over the course of the game may help, but after the mayhem of the battle royale phase and how likely it is for everyone’s scores to greatly differ from where they were prior, the bonus points often end up being what can clinch a victory. The game then seems built around playing the metagame if you aren’t able to secure a lead early on.

But also like Mario Party, the actual competitive aspects are moot. Kirby’s Dream Buffet is a party game first and foremost. These sorts of games aren’t meant to be super balanced competitive experiences, but something you can just load up and have some fun with and maybe get a few laughs out of. To that end, Kirby’s Dream Buffet is successful. It’s rather slight overall – you can easily get your fill in just a few games since there isn’t a whole lot to it – but enjoyable even so.