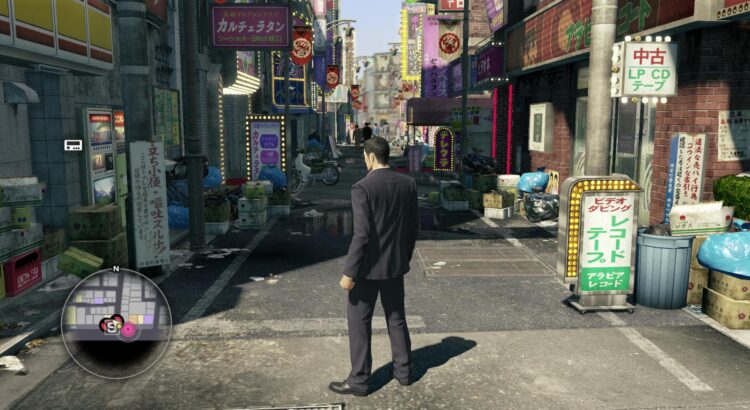 It was only really last year that I first properly got a taste for Japanese pop culture. Prior to last year, the extent of my knowledge went only as far as having glimpsed a few episodes of the Pokémon TV show during the 1990s and having watched the film Battle Royale. Last year however I became a fully invested fan of the anime series Neon Genesis Evangelion (which was re-released on Netflix), and I found myself hunting down not only the Rebuild films but also buying my first manga. I’m slowly working my way through the backlog of Miyazaki films and have been very much enjoying my immersion into Japanese media. A major part of that has also been playing Yakuza 0. The Yakuza series has long seen great success inside Japan, but was only rarely exported to the West. It’s only in the last few years that Yakuza has made the jump off PlayStation, coming to PC in 2018 and finally to Xbox One this year. Yakuza 0 is essentially a prequel to the series, but can be played as the first instalment, introducing you to all of the main characters.

Yakuza 0 is set in 1988, in the central Tokyo district of Kamurocho. Kazuma Kiryu, a lowly member of the Dojima Yakuza crime family, beats up a man in a secluded back alley in order to collect payment. However, the man later turns up dead and Kiryu is suspected of murder. Moreover, the crime took place on the “Empty Lot”, a tiny space of unused land which various factions are vying for, in the hopes of redeveloping the entire area. The plot of Yakuza 0 is an intricate, tightly woven mesh and it is to the games credit that you continually feel invested in it and all of the characters. Kiryu’s relationship with his adoptive brother Akira Nishikiyama is nicely explored, as well as his interactions with the Yakuza crime lords. You also get to play as Goro Majima for some sections of the game, who is an extremely different and more flamboyant character compared to Kiryu. Performances across the board are excellent, especially from some of the villains such as Daisaku Kuze. Kiryu is an excellent lead character who has a gruff exterior but a heart of gold, a great dichotomy for someone who is on paper a cold-hearted thug.

Gameplay is quite an eclectic mixture. Most missions involve some element of fighting, and Kiryu, as “the Dragon of Dojima” is well versed in the combat arts. There are three different fighting styles, each with their own skill tree where you can unlock new moves and special abilities. The fighting style is a good blend of “simple-to-use/tough-to-master” meaning you can still get through most fights even if your technique is lacking. You can also perform a variety of environmental takedowns on enemies using different bits of equipment lying around, such as whacking someone over the head with a bicycle or slamming their head in a car-door. Although these sound incredibly violent and gruesome, it feels a lot more comic book action that gritty realism (especially as very little blood is ever displayed). Overall the fighting is really enjoyable and while there is probably a bit too much of it, as you become more powerful it becomes quite cathartic to beat up endless waves of street punks.

There is also a huge variety of side activities, from simple side missions to a property management sim, a nightclub manager sim, slot car racing, old SEGA arcade games, and much else. The nightclub management simulator could easily be a standalone game in its own right, and is pretty addictive. There are also an enormous number of optional side missions which are almost all uniquely and oddly funny. The sheer variety of attractions and distractions available to Kiryu is extremely impressive, meaning you’ll never be left feeling like there’s not much to do in the open world as there is always some diversion to entertain you. Similarly, you can eat and drink at a variety of restaurants and bars, many of which feature real-world drinks, especially a fine selection of whiskies (a nod to Yakuza’s spiritual predecessor Shenmue).

In terms of graphics the game isn’t a powerhouse, but it certainly gets the job done. The bright neon signs and bustling streets of Kamurocho look great, especially in the rain. The open world isn’t huge but the dense collection of streets and alleys makes it feel larger in principle. Sometimes background NPCs will randomly start intruding on cutscenes only to do a u-turn and walk away, but I constantly found this hilarious. Performance is solid across the board. The music is one area that just feels average; there is a soundtrack but it is not especially memorable on its own merits, aside from during the truly amazing karaoke minigame.

Yakuza 0 is an excellent opening chapter to the mainline Yakuza series, getting you invested in a colourful cast of characters and making you want to follow their stories further. Spending time with Kiryu and his stoic witticisms is weirdly a quite uplifting experience given the number of ordinary people’s problems Kiryu is able to resolve. Despite the often serious nature of the main plot, Yakuza 0 is always able to deftly juggle an emotional main story with some bizarre and downright weird side stories. This should create an inherent dichotomy, but Yakuza 0 succeeds in presenting its world as entirely ordinary, and you are easily able to suspend the disbelief to just go with the flow.